Botond Roska and his group at the Friedrich Miescher Institute for Biomedical Research (FMI) implicate a clearly defined neuron type and its circuit in the retina in the pathophysiology of idiopathic congenital nystagmus. In a mouse model of the disease, which shows similar clinical symptoms as patients, a defect in starburst cells elicited by dysfunctional FRMD7 leads to the loss of the horizontal optokinetic reflex.

The eyes of children with idiopathic congenital nystagmus involuntarily move from left to right and back again. Due to this back and forth movement, their vision is severely impaired, some of them are legally blind. In these children, the horizontal optokinetic reflex that usually helps us to hold our gaze steady is lost. In about 70% of the cases the culprit has been identified: a gene sitting on the X chromosome called FRMD7. However, how a defect in this gene leads to the disease has remained unknown.

This is where the work from the group of Botond Roska, Senior group leader at the FMI and Professor at the University of Basel, offers valuable new insights. As they published in Neuron, they showed in mice that the lack of functional FRMD7 causes the loss of the horizontal optokinetic reflex. More specifically, they could show that the absence of FRMD7 impairs the function of one clearly defined cell type in the retina, the starburst amacrine cells. Starburst amacrine cells are interneurons that asymmetrically inhibit ganglion cells depending on the direction of the movement of an object or the entire scene.

These results were made possible thanks to a microelectronic chip from the group of Andreas Hierlemann from the Department of Biosystems Science and Engineering (D-BSSE) of the ETH Zurich. This high-density array allowed the neurobiologists to measure the electrical signal of thousands of ganglion cells simultaneously, as the retina processed the movement of objects. “It was striking to see how we totally lost signal in the horizontal direction in the absence of FRMD7,” commented Michele Fiscella, one of the first authors of the publication. “We think that FRMD7 is involved in establishing the asymmetric connections between starburst amacrine cells and ganglion cells, a developmental step occurring early after birth,” said Antonia Drinnenberg, another first author.

With these results, the neurobiologists were for the first time able to implicate a clearly defined neuron type in the pathophysiology of a neurological disease. “To my knowledge this is the first time that we can link a disease to a defect in neurocomputation,” commented Keisuke Yonehara, the lead author of the paper.

To further validate whether dysfunction of FRMD7 in starburst cells could also cause the lack of horizontal reflex in congenital nystagmus in humans, the scientists compared the disease symptoms in patients and in mice lacking FRMD7. “Patients were able to voluntarily move their eyes horizontally, so horizontal eye movement as such was not impaired,” explained Roska, “In addition, the vertical optokinetic reflex was not affected. And since the neuronal pathways controlling the reflex is conserved in mammals, we believe that also in humans the loss of the horizontal reflex is, at least partly, due to the loss of FRMD7 in starburst cells.”

The scientists now have a valuable mouse model at hand that clearly mirrors a symptom of the human disease, and a molecular entry point, FRMD7 in starburst cells, to further probe into the molecular mechanisms of the disease.

On Botond Roska
Botond Roska is interested in how neurons interact in local neuronal networks to compute behaviorally relevant functions. He studies these processes in the mammalian retina, thalamus and visual cortex. He has also done research into retinitis pigmentosa, a rare disease that leads to blindness. In the course of these experiments he has been able to identify a novel approach to treat the disease.
» More about Botond Roska 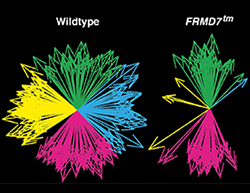 “It was striking to see how we totally lost signal in the horizontal direction in the absence of FRMD7,” commented Michele Fiscella, Postdoctoral Fellow at the FMI and D-BSSE. 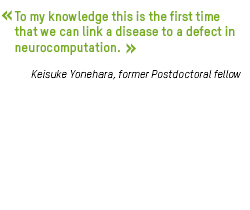 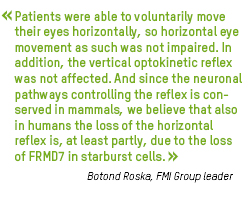