Cancer research is increasingly focusing on therapeutic approaches in which disease causing proteins are marked for early degradation. Nicolas Thomä and his group at the Friedrich Miescher Institute for Biomedical Research have now shown how pharmaceutical compounds hijack an ubiquitin ligase to target such proteins for degradation. This new mechanism could provide opportunities for targeted degradation of cancer proteins.

During the last decade, cancer researchers have been seeking to exploit the cellular “waste disposal system” to induce degradation of proteins that cause or promote cancer. To trigger degradation, cellular proteins need to be labeled with a disposal tag, which is achieved by the activity of so called ubiquitin ligase enzymes. Therefore, researchers have pursued various strategies for rendering disease-causing proteins susceptible to the action of ubiquitin ligases and thus inducing degradation.

In a study published today in Nature, Nicolas Thomä, a group leader at the Friedrich Miescher Institute for Biomedical Research (FMI), and co-workers have now shown that small pharmaceutical molecules (compounds) destabilize specific cancer proteins by gluing them to an ubiquitin ligase. Thomä comments: “This is a new mode of action for a therapeutic agent, as it induces selective degradation of specific targets rather than inhibiting enzymatic function. It also represents a new emerging paradigm in pharmacology, and we now see for the first time how this works on the molecular level.”

The scientists described this new mechanism by investigating the thalidomide derivative lenalidomide. This drug is clinically effective in the treatment of blood cancers such as multiple myeloma and myelodysplastic syndrome, where it induces degradation of various cancer-associated proteins, including casein kinase 1α (CK1α). However, it remained unclear how lenalidomide alters the specificity of the relevant ubiquitin ligase complex so that CK1α is marked for degradation.

By elucidating the crystal structure of DDB1–CRBN bound to lenalidomide and CK1α, first author Georg Petzold (a postdoc in Thomä’s group) showed that lenalidomide enables the binding of CK1α. Petzold explains: “In the ubiquitin ligase complex, CRBN is responsible for recruiting substrates. We found that lenalidomide binding to CRBN creates a neomorphic interface that is necessary to bind CK1α.”

In the case of lenalidomide, the efficacy of the drug is based on inducing the destruction of disease causing enzymes rather than inhibiting its enzymatic function. Thomä says: “By observing how a small molecule glues a protein to an ubiquitin ligase, we now have a blueprint that will help develop new small molecule therapeutics that work by a related mechanism and could be applied to other diseases.”

More about Nicolas Thomä
Nicolas Thomä is a Senior group leader at the FMI. He has made significant contributions to our understanding of large multi-component protein machines that ensure genome stability and maintenance. Thomä and his research group at the FMI work on large ubiquitin ligase enzyme complexes that regulate protein stability in the cell.. He combines X-ray crystallography with biochemical and biophysical studies to better understand large protein complexes involved in crucial cellular functions such as DNA repair, telomere maintenance and epigenetics in health and disease.
» More information 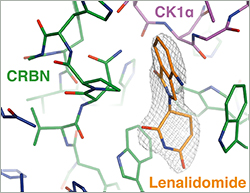 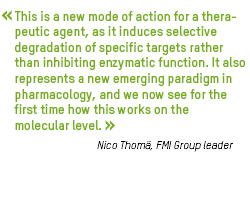