Marc Bühler, a Senior group leader at the FMI, is among the winners of the 2015 European Research Council (ERC) Consolidator Grant competition. With Consolidator Grants, the ERC supports excellent mid career scientists across Europe. Bühler received the grant for his research on the mechanisms underlying small-RNA-mediated gene silencing across generations.

The epigeneticist Marc Bühler joined the FMI in 2008 as a Junior group leader to pursue his research interest in the ability of non-coding RNAs to influence chromatin structure. “I’ve been involved in this field since my postdoctoral fellowship at Harvard Medical School – more than a decade ago – when the link between chromatin and RNAi was first discovered,” says Bühler.

Since then, he and his group have been investigating the mechanisms underlying small-RNA-directed chromatin regulation. Among other things, they discovered genetic preconditions enabling stable and heritable gene silencing that can be induced by synthetic small RNAs in yeast. Bühler explains: “We discovered a negative regulator of small-RNA-mediated heterochromatin formation. Upon its inactivation, we can use small RNAs to trigger sequence-specific gene silencing that is maintained in the next generation, even when the original RNA molecule is no longer present.” The Bühler group thus discovered a truly epigenetic phenomenon: they were able to alter gene expression across generations – thus influencing cell development – without directly changing the DNA sequence. The ERC Consolidator Grant now allows the team to pursue this project further, investigating whether such a mechanism is conserved in mammalian cells.

ERC Consolidator Grants are awarded to Europe’s top researchers to enable them to consolidate their research teams and develop their innovative ideas. In 2015, 302 European researchers received funding; the overall success rate for applications was 15%. Carlos Moedas, European Commissioner for Research, Science and Innovation, said: “As part of Horizon 2020, the ERC funds the work of some of the most brilliant minds in frontier research, people whose discoveries can start new industries, new markets and contribute to the welfare of the planet.”

As well as providing funding for FMI research, these grants are an excellent means to challenge and harness the innovative strength of FMI scientists, allowing them to network with researchers throughout Europe and make a significant contribution to the excellent reputation of Swiss research. 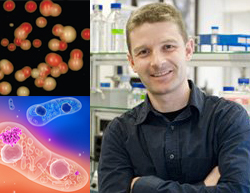