Nicolas Thomä and his group at the Friedrich Miescher Institute for Biomedical Research have elucidated an important regulatory mechanism controlling DNA repair and protein degradation - two processes of particular interest for cancer therapy. They have shown how a substrate-dependent change in the structural arrangement of two large protein machines initiates DNA repair and protein degradation. These findings, published in Nature, open up new perspectives for drug discovery.

“Structures of large assemblies very often give us important clues for function.” This mantra of structural biologists around the world is particularly true for a recent study by Nicolas Thomä’s group at the Friedrich Miescher Institute for Biomedical Research (FMI). Via an in-depth structural analysis of a set of protein machines involved in DNA repair and protein degradation, the scientists elucidated an important regulatory mechanism in the interplay of these large multi-protein complexes.

Simone Cavadini, project leader in the Thomä lab, explains: “We knew that two large protein machines, the cullin-RING ubiquitin E3 ligase 4 (CRL4) and the COP9 signalosome (CSN) work together to protect the genome from DNA damage induced by UV light. But it was not clear how the interaction between CSN and CRL4 takes place, and how CSN is involved in the activation of CRLs. Also, CSN serves more than 250 CRL protein machines, which all look different and work in different aspects of biology. So it was very puzzling how that works.”

Obtaining a protein structure can be daunting. For decades, the method of choice for determining 3D protein structures has been X-ray crystallography, but this method has its limitations. Certain types of proteins, such as large multi-protein machines, are almost impossible to crystallize. Recently, with the advent of new direct electron detectors and improved software solutions, structural biology has been revolutionized by dramatic increases in the resolution of cryo-electron microscopy. “Cryo-EM has therefore become an ideal tool for the questions we are interested in,” says Cavadini.

In a paper published in Nature, the FMI scientists, together with colleagues at NIBR, the University of Basel and Kobe University, have now presented cryo-EM structures for CSN in complex with CRL4 at a resolution of 6.4 Å (1 angstrom is one-tenth of a nanometer). These show how CSN binds to a ubiquitin ligase that is modified by a protein called NEDD8, an activator of the ligase. CSN removes NEDD8 and protects CRL from auto-ubiquitination, keeping CRL in an inactive state. In addition, because cryo-EM makes it possible to capture proteins in different conformations, the scientists were able to reveal different steps in the CRL4-CSN binding process, describing an induced-fit mechanism underlying CSN activation upon CRL binding.

Moreover, Thomä and his group showed that the CSN deneddylation rate for a given cullin is influenced by the presence of its substrate, which competes with CSN for cullin binding. As Thomä points out, this has important regulatory consequences: “We’ve shown that a substrate – in this case the DNA – bound to CRL4 displaces CSN and sterically inhibits further interaction. Most interestingly, our experiments show that this is true for other CRLs as well. We think this regulatory mechanism is universal.”

Based on their results and earlier experiments, the scientists thus propose that substrate-free CRLs are inactivated by CSN; CSN does not engage an active ligase, as the substrate of the ligase would otherwise sterically clash with CSN. Thomä comments: “This has interesting implications for many cellular processes because it not only regulates DNA damage repair but also protein degradation by small molecular weight compounds – and these proteins also have to have a certain size, otherwise their ligases will be shut down by CSN.”

More about Nicolas Thomä
Nicolas Thomä is a Senior Group Leader at the FMI. He is interested in the machinery that controls the integrity of the DNA. He combines X-ray crystallography and cryo-electron microscopy with biochemical and biophysical studies to better understand large protein complexes involved in crucial cellular functions such as DNA repair, telomere maintenance and epigenetics in health and disease.
» More information 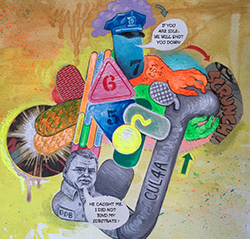 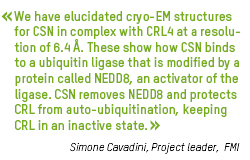 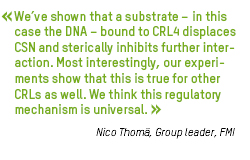 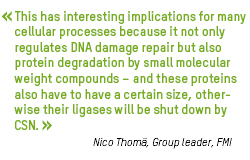