How fear makes us freeze

Andreas Lüthi and his group at the Friedrich Miescher Institute for Biomedical Research (FMI) have identified and characterized the neuronal circuitry in the brain, which controls defensive behavior in threatening situations. In a study published in Nature, they show which neurons trigger fear-related freezing and how the freezing pathway interacts with pathways responsible for flight.

Fear protects us in a world full of dangers. This is particularly evident in small rodents, such as mice, which exhibit various reactions to threats: freezing, flight or – as a last resort – defensive attack. In recent decades, researchers including Andreas Lüthi of the FMI have investigated the processes in the brain which give rise to fear, and how fear is learned. But it has not been clear to date how the state of fear triggers a response which extends all the way to the muscles.

These processes have now been studied by Philip Tovote, a postdoctoral fellow at the FMI, in collaboration with other members of Andreas Lüthi’s group and with Soledad Esposito from Silvia Arber’s group; their findings were published in Nature today. Using modern neuroanatomical tracing methods in combination with physiological approaches, the researchers identified neurons in the midbrain that are activated during freezing. They then identified an output pathway leading to a medullary area involved in motor control. At the same time, they identified a pathway leading from the central nucleus of the amygdala (the forebrain structure controlling fear responses) to the midbrain. Lüthi explains: “We’ve now defined the neuronal circuitry underlying the execution of freezing, from the central nucleus of the amygdala to the neurons that control our muscles.”

Often, the behavioral response to a threat needs to be rapidly adapted; for example, there may be a switch from freezing to flight. The researchers therefore investigated whether and how freezing is influenced by the flight pathway. Tovote comments: “There is evidence that the circuit that triggers freezing interacts with the flight circuit. Not only are neurons from the two circuits anatomically connected, but there is also functional interaction.”

Evolutionarily conserved strategies for coping with fear – essential for survival – are deployed by a wide variety of species. Similar mechanisms exist in humans. Lüthi concludes: “It’s conceivable that malfunction of the circuitry we’ve identified also plays a role in people with anxiety disorders.”

More about the scientists
Andreas Lüthi is an expert in the field of learning processes in the brain. In particular, his work has provided us with a substantially better understanding of the type of brain activity that occurs when we learn to be afraid of something.
» More on Andreas Luthi
» Meet Philip Tovote
» Meet Soledad Esposito 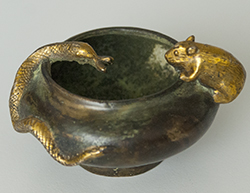 Survival behaviors in the face of threat- replica of a decorative antique Chinese bowl depicting a mouse confronted with a snake. 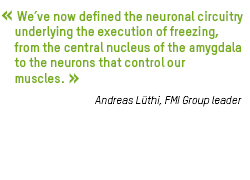 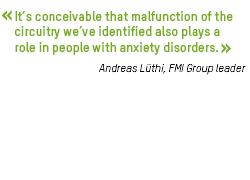