Antoine Peters and colleagues at the Basel University Children's Hospital (UKBB) have discovered why acute leukemias with the same genetic abnormality vary in their aggressiveness based on their cellular origin. They found that the cancer inducing alteration is particularly devastating if it occurs in early hematopoietic stem cells expressing certain genes involved in cell migration and tissue invasion. These findings should now make it possible to classify patients into more clearly defined groups, to adapt treatment, and hopefully also to develop personalized therapeutic strategies for the future.

Acute myeloid leukemia (AML) is a blood cancer caused by various genetic abnormalities in hematopoietic precursor cells which lead to the proliferation of immature white blood cells. As a result, the bone marrow is no longer able to produce normal blood cells. AML can be treated with chemotherapy; however, even in cases with the same genetic abnormality, disease progression often varies. It has not been clear to date why certain forms are more aggressive than others.

Research teams led by Antoine Peters, a Group Leader at the FMI, and by Jürg Schwaller of the University of Basel, Department of Biomedicine and the University Children’s Hospital (UKBB) have now discovered that the aggressiveness of a certain form of AML largely depends on the type of precursor cell in which the genetic alteration occurs. Schwaller says: “These so-called MLL fusion leukemias affect not only very young patients but also patients over 60 who have already undergone chemotherapy.”

Using a mouse model, the researchers showed that the prognosis for this disease is particularly poor if the genetic alteration occurs in hematopoietic stem cells. This type of AML is highly aggressive and is associated with extensive tissue infiltration and resistance to chemotherapy.

Importantly, the findings in mice are also applicable to humans: in samples collected from patients with an aggressive disease course, precisely the same genes were expressed. Peters concludes: “The prognosis thus depends on the particular hematopoietic stem or precursor cells in which the genetic alteration occurs, and what genes are expressed.”

As Schwaller explains, these genes could also serve as biomarkers: “The expression of genes such as EVI1, ERG or ZEB1 now allows us to classify patients into different groups according to prognosis, and if necessary to adapt treatment. Our findings should also enable us to develop new, more personalized therapies for these patients.”

This project was supported by the Swiss National Science Foundation and by the SystemsX.ch Cell Plasticity program.

More about Antoine Peters
Antoine Peters is a Senior group leader at the FMI and Adjunct Professor of Epigenetics at the University of Basel. He aims to elucidate the epigenetic mechanisms regulating cell fate choices during mammalian germ cell and early embryonic development. In particular, he is interested in the processes that control the formation of the totipotent embryo after the fusion of an oocyte and a spermatozoon, two differentiated and transcriptionally silent germ cells. » More on Antoine Peters 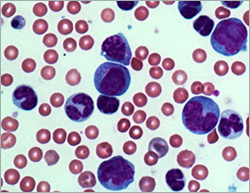 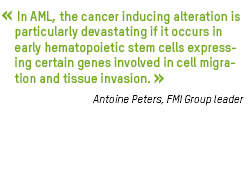 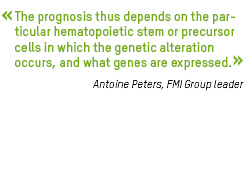