What you see is not always what you get

Georg Keller and his group at the Friedrich Miescher Institute for Biomedical Research (FMI) have identified neurons in the visual cortex whose activity predicts an upcoming visual stimulus. This activity emerges with experience and is integrated with the actual sensory input. What we perceive is thus a combination of what we expect to see and what we actually see.

It has happened to all of us: we fail to notice a friend’s new glasses, our partner’s new hairdo, or a typo in the title of a talk. We simply do not see what is right in front of our eyes. Georg Keller, Junior group leader at the FMI, and his team have now found that these oversights are not due to indifference, but that there might be a biological reason for them.

In an elaborate study published in Nature Neuroscience, the scientists show that – with experience – certain neurons in the visual cortex predict specific visual inputs in clearly defined situations. Keller explains: “The brain generates predictions of what we will see. For example, when we see a person day in, day out, we know what to expect and ‘create’ an internal image of that face; these expectations then influence what we actually see.”

In the experiments, mice learned to navigate through a virtual tunnel, with different patterns on the tunnel wall serving as visual cues. As the mice gained experience, a specific response was observed in clearly defined neurons of the visual cortex which was predictive of the upcoming stimulus. According to first author Aris Fiser, a PhD student in the Keller lab: “These cells were active just before a certain visual cue appeared. By looking at these cells, you could predict what the mouse would see next.” The signals from these neurons were then transmitted further within the visual cortex and integrated with the actual sensory signals coming from the eye.

In addition, if the mouse did not encounter an expected stimulus, a subgroup of neurons in the visual cortex selectively and strongly responded to its absence. Keller comments: “We showed that visual processing is strongly influenced by expectations. These expectations are formed through experience and can both suppress and enhance responses to deviations. In this way, visual perception is likely always a combination of what we expect to see and what we actually see.”

More about Georg Keller
Georg Keller is a Junior group leader at the FMI. He and his group aim to elucidate the key principles underlying sensory processing in the visual cortex. In 2014, he was awarded an SNSF Starting Grant; these grants were introduced as a transitional measure for the Swiss research community after the exclusion of Switzerland from the European Research Council (ERC) Horizon 2020 program.
» More about Georg Keller 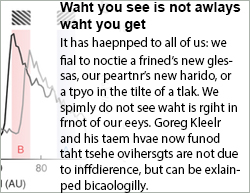 With experience, the activity of clearly defined neurons (black line) in the visual cortex predicts an upcoming visual stimulus. What we expect to see and what we actually see allows us to read this text - or leads to oversights.