Rafal Ciosk and his group at the FMI have identified an important link between the Notch signaling pathway and PRC2-mediated gene silencing. They showed that a fine balance between epigenetic silencing and signaling is crucial for cell-fate decisions. While this study has important implications for normal development and tissue homeostasis, it also provides insights into the origin of certain diseases associated with abnormal Notch signaling, such as acute T cell leukemia.

A delicate balance between intracellular signaling and epigenetic regulation controls cell-fate decisions. Differentiation, proliferation and transformation are all influenced by signals from the extracellular environment. These signals eventually elicit the dynamic coiling or uncoiling of DNA, leading to either repression or expression of specific genes. But it remains largely unclear how these processes operate at the molecular level.

The coiling and uncoiling of DNA is controlled through a variety of modifications on the DNA itself and on histones – the spools around which it is wound. A protein assembly known as Polycomb repressive complex 2 (PRC2) adds methyl groups to histone H3, thus inactivating these stretches of the DNA.

In collaboration with scientists from the Max Delbrück Center for Molecular Medicine in Berlin, the FMI team searched for factors altering the fate of germ cells in the nematode Caenorhabditis elegans. Ciosk explains: “We can reprogram these cells so that they become neurons, and hoped to identify the proteins that facilitate this transition. To our surprise, we found that the Notch signaling pathway is crucially involved in this transition. This pathway is best known for maintaining undifferentiated germline stem cells.”

The scientists then showed that Notch activates numerous genes normally repressed by PRC2, and that this function is independent of the function for which the pathway is best known. In addition, they dissected the mechanism whereby Notch counteracts the effects of PRC2 – namely, transcriptional activation of a histone demethylase, UTX-1, which may then block the effects of PRC2 by removing the repressive histone marks.

Finally, the implications of Ciosk’s findings extend well beyond roundworms and reprograming: Notch signaling is involved in many tissues and, most importantly, also in the development of malignancies. In T-cell acute lymphoblastic leukemia (T-ALL), for instance, malignancy is driven by the oncogenic activation of Notch signaling. In this disease, PRC2 acts as a tumor suppressor and Notch antagonizes the silencing of genes by PRC2. Ciosk comments: “With the identification of UTX-1, we have now established a link between these two agonistic actors. In addition, our insights may provide us with an entry point into other diseases involving a pathological increase in Notch signaling.”

More about Rafal Ciosk
Rafal Ciosk is a Senior group leader at the FMI. His research focuses on mRNA regulation, including interactions with RNA-binding proteins. He is also interested in how RNA-based regulatory mechanisms affect fundamental biological processes, such as maintenance of tissue homeostasis by self-renewing stem cells or cell-fate remodeling during development.
» More about Rafal Ciosk 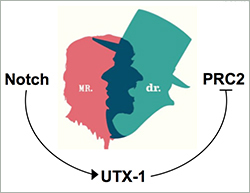 As in the “Strange Case of Dr. Jekyll and Mr. Hyde”, a subtle change can lead to a gross alteration in identity. The interplay between Notch and PRC2 defines cell fate: A good cell and stable cell fate (Dr. Jekyll), or perturbation of cell identity and oncogenic transformation (Mr. Hyde).