Susan Gasser and her group at the FMI have found the pathway through which eukaryotic organisms protect their genomes from rearrangements and deletions that arise from repetitive DNA. Human genomes, like those of simple animals like worms, are filled with repeat sequences, many being remnants of viral infections of the distant past. This repetitive DNA is usually kept silent. The transcription of these repeats into RNA was shown by the Gasser laboratory to generate toxic hybrids between RNA and DNA. These aberrant "R-loops" can lead to deletions and insertions, endangering the integrity of the genome. Keeping them silent is the task of a universally conserved epigenetic modification on histone H3: the methylation of lysine 9. While this modification also silences genes during development, is was shown to be dispensible for tissue differentiation in C. elegans; instead it serves to protect the genome from repeat-driven mutation.

Methyl groups on histones, the proteins around which DNA is packaged, serve as a message to the cellular machinery about whether a DNA sequence should be transcribed or not. Histones methylated at H3 lysine 9 are more tightly packed and the DNA wrapped around them is therefore less accessible to the transcription machinery. Histone methylation keeps genes silent when they should not be expressed, and not surprisingly, the proteins that add these methyl groups, histone methyl transferases (HMTs), have been implicated in cell differentiation as well as in a variety of cancers. Certain inhibitors of HMTs are already in preclinical trials.

The group of Susan Gasser, Director of the FMI, has asked what happens when one eliminates this abundant histone modification from the genome of a complex organism like the roundworm C. elegans. In their study they found that the HMTs that methylate histone H3 on lysine 9 (H3K9me HMTs) are dispensable for development, yet they play an important role in genome stability.

Mammalian cells have at least 8 H3K9 HMTs with partially redundant functions, rendering it difficult to study their role in living organisms. The situation in C. elegans is less complicated: there are only two H3K9 HMTs, and these modify histones bound to both repetitive DNA and tissue-specific genes. In a study published in Nature Genetics, the FMI scientists showed that the presence of H3K9me at the repetitive elements is crucially important. “In the absence of H3K9 methylation, these regions become transcribed into RNA, and this inappropriate transcription is associated with insertions, deletions and copy-number variations of the underlying DNA. Loss of these particular HMTs leads to a very high rate of genomic mutation,” comments Peter Zeller, first author and PhD student in the Gasser lab.

Unwanted DNA lesions often occur when the replication machinery is stopped in its progress. A frequent cause of this is the collision of DNA replication polymerases with transcription. In this case, DNA and RNA pair in very stable structures called R-loops, which lead to replication fork collapse. In the worms that lack H3K9 methylation, these R-loops were found enriched on the inappropriately transcribed repetitive elements. "We hypothesize that the R-loops lead to the mutations that we observe in H3K9me deficient worms", explains Jan Padeken, co-first author and postdoctoral fellow in the group.

For cancer therapies that aim to inhibit the H3K9 methyltransferases, these are sobering news. “One would not want to use a reagent for cancer therapy that destabilizes the genome of healthy cells, particularly given that the loss of H3K9me introduces insertions and deletions at a staggering rate”, explains Gasser. Further studies will show whether the conclusions drawn from this study in worms has direct impact on therapies targeted for human cancers. 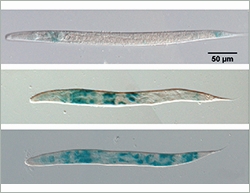 The blue staining is indicative of insertions and deletions in somatic genomes that result from the loss of H3K9 methylation in the nematode, C. elegans.