Yukiko Shimada, Fabio Mohn, and Marc Bühler at the FMI elucidated an important mechanistic detail of small RNA mediated chromatin silencing. They showed in fission yeast that the small RNA in the RNA induced silencing complex (RISC) interacts with nascent transcripts and not with complementary DNA to induce heterochromatin formation. In addition, both the transcription rate and transcript processing have an impact on the silencing process.

A lot is already known about small RNAs and how they regulate the chromatin state and transcriptional gene silencing. However, one important mechanistic aspect has been impossible to study: How does the protein complex that carries the small RNA interact with chromatin to silence genes. Is it through interaction of the small RNA with the DNA? Is it through the interaction of small RNAs with newly formed transcripts? Or are there other factors involved?

"It is a fundamental question that has puzzled me for more than 10 years", comments Marc Bühler, Senior group leader at the Friedrich Miescher Institute for Biomedical Research (FMI), "but we never had the tools to address it properly."

Bühler was thus thrilled when Yukiko Shimada, the lab manger of his group, realized that a fission yeast mutant that lacked a functional RNA Polymerase-Associated Factor 1 Complex (Paf1C) allowed them to address exactly this question.

In the project that followed and which was published recently in Genes and Development, Shimada showed that transcription above a certain threshold is necessary for RNA-directed formation of heterochromatin. A series of elegant experiments revealed that the small RNA in the RNA induced silencing complex (RISC), which contains Argonaute, must interact with newly synthesized RNA transcripts. This interaction then leads to heterochromatin formation and thus to the silencing of the corresponding DNA sequence. However, the interaction-and as a consequence heterochromatin formation-is hampered when the transcription rate exceeds a certain level. "There is a window of opportunity for silencing that is linked to the transcription rate," explains Bühler.

Shimada further showed that RNA processing has an influence on small RNA mediated heterochromatin formation. In a process called splicing, RNA transcripts are further cut apart and rearranged. Sequences that do not encode the protein, so called introns, are removed. This is a continuous process that starts as transcription happens. In the cases, where the target lies in an intronic sequence at the beginning of a transcript that is rapidly spliced, heterochromatin formation is bistable. Bühler explains: "In these instances, we observe two cases, the target locus then either stays euchromatic or becomes fully silenced."

Finally, the results show that the small RNA interacts with a complementary, newly transcribed RNA and not DNA. As a whole, the study provides the long sought direct evidence for the nascent transcript model of non-coding RNA directed epigenetic gene silencing and it provides insights for the design of small RNAs that should induce chromatin silencing in multicellular organisms.

On Marc Bühler
Marc Bühler is a Senior group leader at the FMI. His team is investigating epigenetic processes in yeast and animals. By focusing on the interplay between RNAs and chromatin, his work combines two cutting-edge research areas.
» More about Marc Bühler
» The Bühler lab 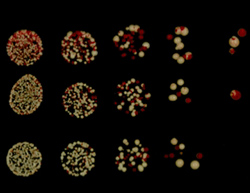