Helge Grosshans and his group at the Friedrich Miescher Institute for Biomedical Research (FMI) have elucidated the mode of action of the RNA-binding protein and stem cell factor LIN41. In an animal model, they showed that LIN41 silences four specific mRNAs, by two distinct mechanisms. They found that the choice of mechanism is determined by where on the mRNA LIN41 binds. As the proteins whose production LIN41 inhibits are responsible for cell maturation, these new findings could be relevant for future stem cell therapies.

A cocktail of four proteins is sufficient to reprogram skin cells so that they become pluripotent stem cells. The mixture of proteins discovered in 2006 by the Japanese scientist Shinya Yamanaka reawakens cellular capacities lost during development. For this discovery – which has major potential for regenerative medicine – Yamanaka was awarded the Nobel Prize in Physiology or Medicine 2012. Since then, the method used to generate induced pluripotent stem (iPS) cells has been further refined. For example, iPS cell quality has been improved by replacing one of the reprogramming factors originally used with another protein – LIN41

LIN41, also known as TRIM71, differs fundamentally from the original set of Yamanaka factors, which are all transcription factors, i.e. proteins that control the copying of information from DNA into mRNA. Instead, LIN41 is thought to act at a subsequent step, possibly binding mature mRNAs to regulate them. However, both the identity of bound mRNAs and the consequences of binding have been largely elusive

In a study published today in Molecular Cell, a team of scientists led by Helge Großhans, an FMI group leader, together with colleagues from Rafal Ciosk’s group addressed these issues. In experiments in the nematode C. elegans, they showed that LIN41 can silence mRNA by binding at either end, but that two distinct mechanisms are involved: if LIN41 binds to the 3’ (back) end, then the mRNA transcript undergoes degradation; if it binds to the 5’ (front) end, then translation is repressed. Großhans comments: “Initially, we were surprised to discover that LIN41 has two different mechanisms of action, and that the mechanism is determined by the binding site. But now we’d be surprised if other RNA-binding proteins didn’t also show a location-dependent choice of activity.”

Among thousands of mRNAs in a cell, LIN41 specifically regulates four that each code for a transcription factor or transcription cofactor, respectively. First author Florian Aeschimann (a PhD student in Großhans’s group) explains: “Interestingly, these factors, especially MAB-10 und LIN-29A, play important roles in the cell maturation process in nematodes as well as in mammalian cells. LIN41 thus inactivates important players in two different ways.” As the new findings on the mode of action of LIN41 provide insights into processes that also occur in the generation of induced pluripotent stem cells, they might be relevant for the development of future stem cell therapies.

On Helge Großhans
Helge Großhans is a group leader at the Friedrich Miescher Institute for Biomedical Research (FMI). With his 10-strong research group, he investigates the function, regulation and metabolism of RNAs. For their investigations, the scientists use the nematode C. elegans, a model organism particularly suitable for studies of this type.
» More about Helge Großhans 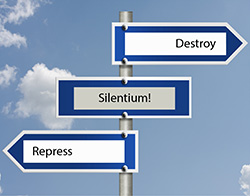 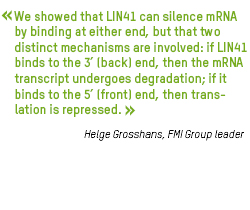 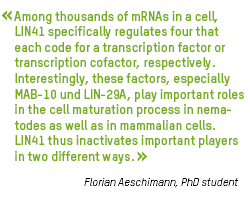