Switching between freezing and flight

Andreas Lüthi and his group at the FMI have identified two types of neurons in the amygdala, each of which generates a distinct fear response - freezing or flight. In addition, these two cell types interact, thus creating a balance, which shifts in one direction or the other, depending on the particular situation. The researchers? findings were published today in Nature.

Our fear responses can escalate from one level to another: while we may pause for a moment if we hear a cracking in the undergrowth as we walk through the woods at night, we will certainly take to our heels if the sound is louder and rapidly approaching. But how long can we simply freeze and when do we need to flee to ensure our safety?

Rodents such as mice exhibit and can learn similar types of behavioral responses to real or perceived threats. They likewise switch between freezing and flight behavior. However, it has not been clear to date what causes the switch between the passive and active responses.

Using a variety of behavioral tests and optogenetic methods, the research group led by Andreas Lüthi at the Friedrich Miescher Institute for Biomedical Research (FMI) has identified the neurons whose interactions in the mouse brain are responsible for the switch between passive and active fear responses.

The scientists showed that in the amygdala – the almond shaped brain structure long known to be a fear center – two different types of inhibitory neurons are responsible for the distinct fear responses. Activation of one of these neuronal populations, which expresses corticotropin releasing factor (CRF), triggers flight. The other population, which expresses somatostatin, (SOM) initiates freezing.

Interestingly, the two cell types are linked by synaptic connections and can inhibit each other. However, if one of the inhibitory actions is removed as a result of inputs from other brain regions, then the appropriate response is generated. First author Jonathan Fadok (a postdoc in Andreas Lüthi’s group) explains: “There’s a balance which can rapidly shift one way or the other in the face of a threat. Here, the context, sensory input such as sounds or odors, but also experiences and internal states are taken into account.”

Whether the same types of cells are also involved in human fear responses remains to be shown. But the defensive strategies deployed to ensure survival in threatening situations are identical in many species. “So it’s conceivable,” says Lüthi, “that a similar balance also regulates fear responses in humans.” And particularly in anxiety disorders, he adds, this balance could be shifted in the direction of escalating fear responses. 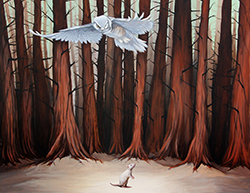 In the face of danger. Picture: David VonDerLinn 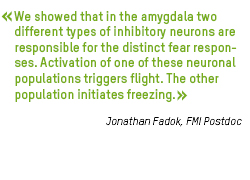 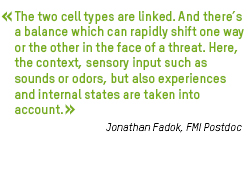 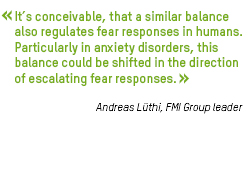