How the thalamus helps us to see

Botond Roska and his team at the FMI have investigated how visual features, extracted in the eye, are combined in the thalamus, the second stage of visual processing in the brain. They have shown that the function of the thalamus is not merely to relay information. Rather, synaptic connections between different types of retinal cells and individual thalamic cells permit the integration of different visual features - in some cases from both eyes.

The sensory thalamus, a small structure located between the brain stem and the cortex, is an important gateway to the brain. Sensory information-what we see, hear, taste or feel-first passes through the thalamus before being processed in higher brain areas and the sensory thalamus was long thought to be the brain's relay station. Recently, however, evidence has accumulated that the thalamus not only relays but also processes input. But it has not been clear what happens at the single cell level.

To address this question, Santiago Rompani, a postdoctoral fellow in Botond Roska's group, developed a sophisticated method using rabies virus to track individual neuronal connections of single thalamic cells in mice. In addition, Fiona Müllner, another postdoc in Roska's lab, developed robust statistical analysis to make sense of the data. They focused on an area known as the lateral geniculate nucleus (LGN), where input from the visual system converges. In the LGN, the axons of different types of retinal ganglion cells make synaptic connections with thalamic neurons. Botond Roska, Senior group leader at the FMI comments: "This is the first time we've been able to trace neuronal connections of a single cell in such a deep structure of the brain."

Using this method, the scientists then showed that ganglion cells connect to thalamic cells in different modes. In the first mode, 1-5 ganglion cells, mostly of the same type, connect with one LGN cell. According to Roska, "This 'relay mode' is what we would have expected: Information from one type of ganglion cell transmitting one feature of the visual scene is further passed on."

Interestingly, two other less expected and more prominent modes were also identified. In the second mode, 6-36 ganglion cells of different types converge from one eye; in this case, the LGN cell receives and integrates information about different aspects of the visual scene before passing it on. A function that goes beyond a pure relay function. In the third mode, a subset of LGN cells receives direct input from up to 91 ganglion cells of different types from both eyes. "This was unexpected," says Roska. "How this integration functions and how it influences our perception remains to be elucidated."

Roska concludes: "We now think that the thalamus takes on a much broader role in sensory information processing, and that different degrees of specialization of thalamic cells add an additional layer to how we perceive our surroundings." 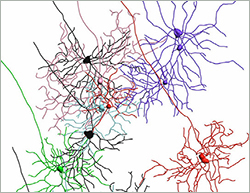 Ganglion cells traced and color-coded based on morphological type. 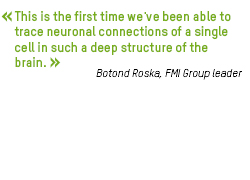 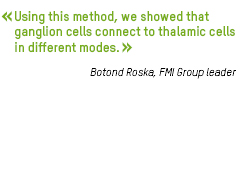 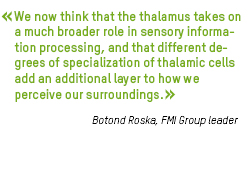