Control of RNA lifespan is vital for the proper functioning of our cells. Marc Bühler's group at the Friedrich Miescher Institute for Biomedical Research (FMI) has discovered a novel mechanism determining the fate of RNA in mammalian cells: two proteins involved in RNA interference - Dgcr8 and Drosha - together with a methyltransferase, Mettl3, mark nascent RNAs for degradation as they are transcribed. This mechanism allows RNA transcripts to "remember" the conditions under which they were synthesized.

Life of an RNA is never easygoing. Its formation, processing, lifespan and degradation are all tightly regulated. This stringent control of RNA metabolism ensures that genes become active at the right time and place, safeguarding cell functions.

In this context, a control mechanism known as RNA interference (RNAi) has attracted a lot of attention. RNAi leads to the fragmentation and inactivation of RNAs in the cytoplasm. Interestingly, in yeast, the RNAi machinery is also active in the nucleus: during RNA synthesis, while the RNA molecules still associate with the DNA, it triggers the degradation of nascent RNAs. Whether the RNAi machinery plays a similar role in mammalian cells has remained unclear.

To address this question, Marc Bühler and his group at the FMI used mouse embryonic stem cells. Bühler comments: "This is a good example of how knowledge gained in a model organism – here in fission yeast – guides our hypotheses and informs our experiments in higher organisms."

In their study, published in Nature Structural & Molecular Biology, the scientists showed that two well known mammalian RNAi factors interact with chromatin: both Dgcr8 (an RNA-binding protein) and Drosha (an RNase) bind to nascent transcripts, thereby silencing genes co-transcriptionally. First author Philip Knuckles, an NCCR-funded postdoctoral fellow in Bühler’s lab, explains: "In multicellular organisms, Dgcr8 and Drosha form a complex called the microprocessor (MP). This complex does not exist in yeast, but our results suggest that it takes over the function of the yeast RNAi protein Dicer. The principle is conserved, but the players differ slightly."

The FMI scientists also showed that an enzyme known as Mettl3 is involved in the degradation of nascent RNAs. Mettl3 transfers methyl groups to adenosine residues in RNA, a mark that also influences RNA stability. Knuckles says: "In our experiments, we showed that Mettl3 binds to chromatin while RNA is being transcribed, and that this Mettl3 association stimulates Dgcr8 binding."

The MP/Mettl3 system allows the cell to react rapidly to changing growth conditions. Bühler explains: "During a stress situation induced by high temperature, the heat-shock RNA transcripts produced are concomitantly tagged by adenosine methylation. This marks these RNAs for subsequent degradation, enabling a swift but time-limited response to stress." According to Bühler, both the fast stress response and the rapid clearance of heat-shock transcripts and proteins are important for cells: "The accumulation of stress response proteins is detrimental to the cell and is often observed in cancer.

About Marc Bühler
Marc Bühler is a Senior Group Leader at the FMI. His team investigates epigenetic processes in yeast and animals. His work, focusing on the interplay between RNAs and chromatin, combines two cutting-edge research areas.
» More about Marc Bühler’s research
» The Bühler lab 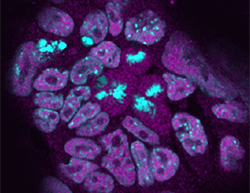 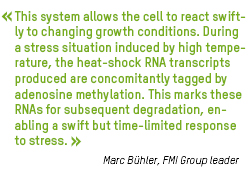