A molecular plaster to repair DNA

All cells are confronted with DNA damage, for example by exposure of the skin to UV rays, chemical byproducts of nerve cells consuming sugar, or immune cells destroying bacteria. If these DNA lesions are not - or badly - repaired, they may initiate tumor formation. Thankfully, cells have evolved an elaborate control system to correct these DNA anomalies. Uli Rass and Nico Thomä at the FMI, together with colleagues at the University of Geneva (UNIGE), have now discovered the key role of a protein called Rif1 in the protection, stabilization and repair of damaged DNA. This study, published in the journal Nature Structural & Molecular Biology, uncovers a DNA maintenance function likely to be present in all eukaryotes because the region of Rif1 that enables the formation of a protective sheath around DNA lesions is similar in humans and yeast.

A multi-faceted protein
Cells have developed a complex control system to repair the DNA breaks that occur every day. This system includes patrolling proteins, molecules that set off an alarm, as well as damage-repairing enzymes. The teams of Nicolas Thomä and Ulrich Rass at the FMI and the group of David Shore at UNIGE are interested in a protein called Rif1. Rif1 is involved in many processes, some of which are related to DNA replication and repair. Certain activities of Rif1, a protein present in both humans and yeast, vary from one type of organism to another, while others remain similar. It was not clear why that was the case.

The scientists thus examined the molecular structure of Rif1. “This protein is made of divergent functional elements depending on the species studied, which may explain the diversity of its activities. But there is also a common part whose function was hitherto unknown”, says Stefano Mattarocci, co-first author of the study and member of the Geneva group.

A ubiquitous repair module
By studying the 3D structure of this common region, the biologists have discovered that it is intimately involved in the protection and the repair of deteriorated DNA. “This region of Rif1 binds to the damaged strands and then recruits more Rif1 proteins that assemble to form a protective sheath around the weakened segment”, notes Julia Reinert, co-first author and member of the Basel team.

This molecular plaster gates access of repair enzymes to the protected strands, while restricting access of enzymes responsible for degrading the ends of damaged DNA. All eukaryotes, that is to say organisms whose cells have a nucleus, appear to benefit from the sheath formed by Rif1, since the protective region of this protein is similar in humans and yeast.

This study has revealed the molecular mechanism allowing Rif1 to preserve the integrity of the genome. The findings contribute to a better understanding of how cells avoid the accumulation of DNA lesions, which would otherwise lead to senescence, cell death, or cancer.

About Uli Rass
Ulrich Rass and his group are interested in cellular DNA repair mechanisms, which resolve the many types of DNA damage that constantly affect the genome. He focuses in particular on the repair of chromosomal breaks and the molecular basis of the replication stress response.
» More about Ulrich Rass

About Nico Thomä
Nicolas Thomä is a Senior Group Leader at the FMI. He is interested in the machinery that controls the integrity of the DNA. He combines X-ray crystallography and cryo-electron microscopy with biochemical and biophysical studies to better understand large protein complexes involved in crucial cellular functions such as DNA repair, telomere maintenance and epigenetics in health and disease.
» More about Nico Thomä 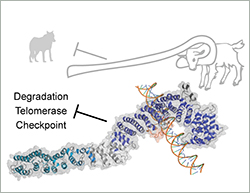