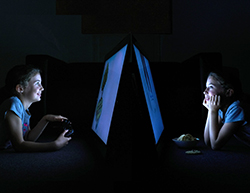 The scientists used two behavioral paradigms: In one, represented by a child playing a video game, the mouse controls its own visual feedback in a virtual reality environment; in the other, represented by the child watching TV, the mouse experienced visual input independent of its movement.

Coupling of movement and vision

In a study published in Cell, Georg Keller and his group shed light on neural circuits in the cortex that underlie the integration of movement and visual feedback. They identified a mechanism in the visual cortex responsible for the coupling of sensory and motor experience and showed that perception and visually guided behavior are shaped by predictions of visual feedback during locomotion.

When we reach for something, the movement of our hand is guided by visual feedback. However, it has been unclear to date what neural circuits underlie this type of sensorimotor integration, and how they are shaped by sensorimotor experience during development.

From previous experiments, the neurobiologists in Georg Keller’s group at the Friedrich Miescher Institute for Biomedical Research (FMI) knew that neurons in the visual cortex compare what mice expect to see with what they actually see. These neurons were also known to show a strong response to mismatches between actual and expected visual feedback.

To investigate this further, the researchers reared mice in a virtual reality environment and recorded neural activity during running. Georg Keller says: “It’s like playing a very simple computer game for mice. Neurons in the visual cortex are most active when we briefly stop the visual world while the mouse is running, thus inducing a mismatch between what the mouse expects to see based on its behavior and what it actually sees.” It had not been clear, however, whether and how the responses to such mismatches are shaped by experience, and how different types of neuron interact to compute mismatch responses.

The researchers found that mismatch responses only occur in mice that have already experienced the coupling of visual feedback to movement. In their experiments, groups of mice were reared in virtual environments where visual feedback was either coupled to or uncoupled from (i.e. independent of) the mouse’s locomotion. Alex Attinger, a PhD student in Keller’s group and co-first author, explains: “When the mice trained in non-coupled conditions later ran down the virtual corridor, neurons would not respond to brief stops of the visual world. Unlike mice reared normally, they had never learned how their running caused the visual world to change.”

By recording the activity of different (genetically identified) classes of neurons, the researchers showed how inhibitory somatostatin neurons interact with excitatory neurons to compute the difference between a prediction based on running speed and actual visual feedback. They also found that the interaction between these different neurons is finely tuned by experience.

Keller sums up: “In our study, we showed that what is critical for normal development of sensory processing is not sensory input alone, but the coupling of sensory and motor experience. Our results offer a mechanism for how predictions interact with sensory input, thus altering our understanding of how sensory information is processed.”

About Georg Keller
Georg Keller is a Junior group leader at the FMI. He and his group aim to elucidate the key principles underlying sensory processing in the visual cortex. In 2014, he was awarded an SNSF Starting Grant; these grants were introduced as a transitional measure for the Swiss research community after the exclusion of Switzerland from the European Research Council (ERC) Horizon 2020 program.
» More about Georg Keller

The scientists used two behavioral paradigms: In one, represented by a child playing a video game, the mouse controls its own visual feedback in a virtual reality environment; in the other, represented by the child watching TV, the mouse experienced visual input independent of its movement.