On June 8, 2017, the Friedrich Miescher Institute for Biomedical Research (FMI) in Basel, Switzerland hosted a "Women in Science" event for PhD students and postdocs from life science research institutes in the Basel area. More than 60 (mostly female) participants - from the FMI, Swiss TPH, Biozentrum and Basel University Hospital Department of Biomedicine - attended the event, which included a series of short talks and round-table discussions.

Speaking at the event were five successful professional women at different stages of their career. Jennifer Cobb, an Associate Professor at the University of Calgary – who pursued her postdoctoral studies in Susan Gasser’s group – shared her experience of academic research both in Europe and in North America. Anne Corcoran is a tenured Group Leader at The Babraham Institute in Cambridge (UK). As a scientist, Chair of the Institute’s Athena Swan team on gender equality, and mother, she took the audience on a rollercoaster ride, sharing what she had learned about networking, role models, and mentoring from her ups and downs in science. Miriam Donaldson, Global Head of Diversity & Inclusion at Novartis Pharmaceuticals in Basel, worked as a scientist both in biotech organizations and in academia before joining Novartis. She explained how exploring opportunities off the beaten track and knowing your own strengths helped her to advance in her career. She also highlighted how she pro-actively requested and was able to take advantage of flexible working arrangements. Stephanie Küng, an FMI Gasser lab alumna, now works as a Principal Scientist in Roche’s early drug discovery department. She emphasized how several skills that PhD students and postdocs acquire during their training – communication skills, organizational skills or critical thinking – allowed her to shine in her new position. The final presentation was given by Prisca Liberali, a tenure-track Junior Group Leader at the FMI and mother of two. She admitted that she had experienced bias, but encouraged the participants to move past this and focus on what is important to them and let the results of their work speak for themselves.

The feedback from participants and speakers was very positive, and many a PhD student or postdoc left the event energized to overcome the next career hurdle. FMI postdoc Sarah Carl sums it up nicely: “I enjoyed hearing about the diversity of experiences the speakers have had, and I particularly liked the chance to talk with each of them more informally during the round-table discussions. Even if there is no ‘magic recipe’ for career success, I found it helpful to hear real-life examples of what has or hasn’t worked for people. Despite the challenges that were acknowledged, I left feeling energized and optimistic about the future.” 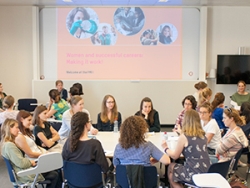 More than 60 participants - from the FMI, Swiss TPH, Biozentrum and Basel University Hospital Department of Biomedicine - attended the event.