If cellular identity is to be maintained, it is important that actively transcribed chromatin stretches remain in a loose configuration as long as these genes are needed. Marc Bühler and his group have uncovered a novel positive feedback loop ? crucially involving the histone acetyltransferase Mst2 ? which ensures that (transcriptionally active) euchromatin cannot be easily converted into (inactive) heterochromatin. Because some of the players in this feedback loop have been implicated in cancer, these findings are relevant to our understanding of human diseases.

From neuron to skin cell, from muscle to liver cell, the state of chromatin is crucial for cellular identity, as it is an integral part of the regulatory circuits that turn genes on or off. Whether DNA is wrapped tightly or loosely around histones thus has important implications for cell fate. Indeed, the breakdown of local chromatin structures can lead to diseases such as cancer.

Marc Bühler, Senior Group Leader at the Friedrich Miescher Institute for Biomedical Research (FMI), is interested in the processes that control the establishment of distinct chromatin states: "Whereas intense research efforts have gone into understanding how repressed chromatin is established and maintained, mechanisms that might maintain active chromatin states have not received as much attention."

He and his group have now addressed this question in a study published in Molecular Cell. They showed that the anchoring of the histone acetyltransferase Mst2 to actively transcribed genes prevents the euchromatin from being transformed into an inactive state (heterochromatin). Mst2 is recruited to the DNA by a protein called Pdp3 that binds to a specific methylation mark on histone H3K36, which is itself deposited co-transcriptionally.

First author Valentin Flury, a PhD student, says: "Unexpectedly, using an acetylomics approach, we found that Mst2 acetylates not only histones (as the name suggests) but also Brl1, a component of the histone H2B ubiquitin ligase complex." This increases ubiquitination of the histone H2B and, concomitantly, transcription. Bühler explains: "This interaction cascade establishes a positive feedback loop, ensuring that chromatin remains in the active state and that RNA polymerase keeps effectively transcribing the genes in that location."

Bühler adds that the results are very likely relevant for human disease: "All the components in this regulatory mechanism are highly conserved in human cells. For instance, the methylation mark that attracts the acetyltransferase to actively transcribed chromatin is also present in human cells." He also points out that the enzymes which add these marks to the histones (H3K36 methyltransferases), as well as the histone residue itself, have been found to be mutated in cancer.

About Marc Bühler
Marc Bühler is a Senior Group Leader at the FMI. His team investigates epigenetic processes in yeast and animals. His work, focusing on the interplay between RNAs and chromatin, combines two cutting-edge research areas.
» More about Marc Bühler’s research
» The Bühler lab 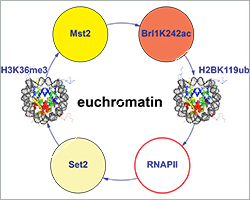 Positive feedback loop that involves the acetylation of a non-histone target, which in turn mediates histone ubiquitination preserves the active chromatin state. 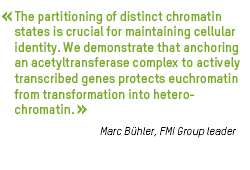 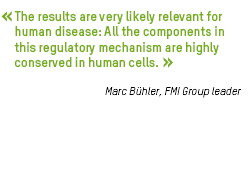