Earlier this summer, PhD students from the FMI and the Instituto Gulbenkian de Ciência (IGC) organized a joint retreat in Vimeiro, Portugal. Like the FMI, the IGC is a leading international biomedical research and graduate training institute in Portugal, with research groups in epigenetics, neurobiology and quantitative biology. The four-day symposium hosted four keynote speakers, and all the students participating either gave a talk or presented a poster, thus creating a great atmosphere for scientific exchange and interaction.

The FMI-IGC PhD retreat (May 28–31, 2017) was designed to provide a platform for scientific exchange for early-career researchers. There were four keynote lectures, interspersed with students' talks and poster sessions.

Starting the symposium, Isabel Bäurle (Institute for Biochemistry and Biology, University of Potsdam) explained the molecular details of how chromatin regulates heat stress memory in plants, and how this knowledge might open up new avenues for genetic engineering of heat-resistant crops.
David Keays (Research Institute of Molecular Pathology, Vienna) focused on the scientific mystery of magnetosensation in vertebrates. New evidence from his group identified a previously undescribed organelle in the inner ear, which may play a role in sensation of the earth’s magnetic fields.
The third keynote speaker, Xavier Belles (Institute of Evolutionary Biology, Barcelona), provided insights into the elegant molecular mechanisms of insect metamorphosis. His research elucidates how the interaction of hormones and microRNAs leads to the development of mature insects; a better understanding of this should facilitate future pest control.
Last but not least, James Rush (Novartis Institutes for BioMedical Research, Basel) described how specific antibodies can be used in the treatment of autoimmune diseases and in kidney transplantations. He also reflected on his personal career move from academia to industry.

As well as offering insights into new approaches for scientific discoveries, these lectures gave participants the opportunity to broaden their scientific expertise and interact informally with the invited speakers during coffee breaks and poster sessions. All 76 PhD students from the two institutes generated high levels of interest and intense discussion by giving a talk or presenting a poster on their scientific project. Thanks to the event’s generous sponsors, prizes were awarded for the best presentations: Mihailo Mirkovic (IGC) received an iPad for the “Best Student Talk”, and Anais Cheblal (FMI) for the “Best Student Poster”. Congratulations to both of them!

This was the fifth in a series of events organized by the FMI’s PhD student representatives in collaboration with colleagues from other European scientific institutions. 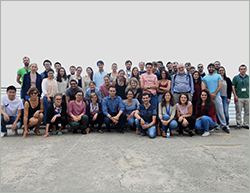 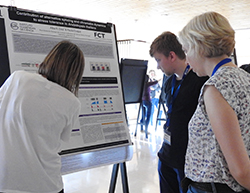 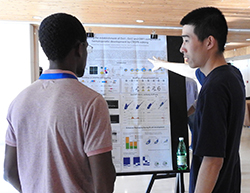