The promoter sets the course for transcription termination

Helge Grosshans and his group at the Friedrich Miescher Institute for Biomedical Research (FMI) have identified two distinct modes of transcription termination - one dependent on, and one independent of, the highly conserved exoribonuclease XRN2. In a fruitful collaboration between wet-lab and computational biologists, they found that the promoter of a gene determines the mechanism for termination of its transcription.

When genetic information is transcribed from DNA to RNA, it is important not only where the process starts but also where it stops. Failure of termination causes "readthrough" into adjacent genes, disrupting their regulation or generating wasteful and possibly harmful fusion transcripts. But, as FMI Group Leader Helge Grosshans points out, "Transcription termination has been largely a black box; apart from an emerging consensus on the importance of a protein known as exoribonuclease 2 (XRN2), little was known about relevant factors and mechanisms."

Grosshans and his group have now looked in more detail at transcription termination in the roundworm Caenorhabditis elegans. Their findings have been published in the journal Genes & Development.

In their study, the scientists examined the effects of inactivating XRN2. They found that transcription failed to be terminated at the ends of many genes – as expected. Unexpectedly, however, for many other genes, termination occurred normally. Grosshans comments: "Our results show that some genes require XRN2 for termination, whereas others do not. In fact, transcription of the latter appears to be refractory to termination by XRN2 activity."

Grosshans concludes: "Our findings are a first step towards a better understanding of transcription termination. A major question to be answered now is what factors drive XRN2-independent termination."

About Helge Grosshans
Helge Grosshans is a Group Leader at the Friedrich Miescher Institute for Biomedical Research (FMI). With his 12-strong research group, he investigates the function, regulation and metabolism of RNAs. For their investigations, the scientists use the nematode C. elegans, a model organism particularly suitable for studies of this type. » More about Helge Grosshans 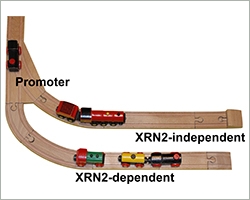 Gene promoters determine how the transcription machinery is stopped at the end of the gene. 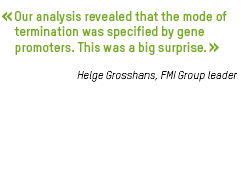 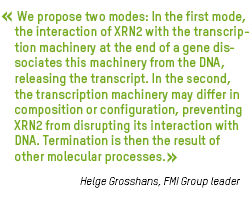