Research groups led by Botond Roska at the Friedrich Miescher Institute for Biomedical Research (FMI) and Daniel Müller at the ETH Zurich Department of Biosystems Science and Engineering (D BSSE) have developed a novel method that allows them to efficiently deliver genes into single cells in whole tissues. This not only facilitates the study of the individual cells in an organ such as the brain, but could also pave the way to new gene therapies.

For decades now, scientists have used viruses as vehicles for introducing new genes into cells. Different types of viruses such as lentivirus, herpes simplex and adeno-associated viruses can be used to genetically engineer individual cells or cellular assemblies. However, existing methods have major drawbacks, which limit their application both in basic research and in gene therapeutic approaches. As Botond Roska, Senior group leader at the FMI, points out: "Recently developed methods to target individual cells opened exciting possibilities, but unfortunately their applicability in tissues is limited or they are technically very complex."

For this reason, the Basel scientists – in particular, postdoctoral fellows Rajib Schubert and Stuart Trenholm – developed a novel method, known as "virus stamping", which is simple, versatile, and can be used for a variety of cell types and viruses both in vivo and in vitro.

In this method, viruses are reversibly bound to a delivery vehicle, which is then brought into the vicinity of the target cell. D-BSSE Professor Daniel Müller explains: "We use both mechanical and magnetic forces to achieve this, depending on whether the cell is on the surface or within the tissue."

For surface cells, an unshielded virus stamper is used: the virus is bound to a blunt glass pipette tip, which is brought into physical contact with the target cell. For cells within an organ or tissue, the stamper must be shielded: the virus is bound to magnetic nanoparticles inside a glass pipette. Once the pipette tip has reached the site of the target cell, the nanoparticles are pulled to the tip of the pipet with magnetic force to deliver the virus.

Schubert comments: "With this method, we’ve been able to infect single cells in cell culture, tissues, animals and organoids. What’s more, we successfully used the method in complex structures such as the brain." In addition, a single cell could be infected with multiple viruses, either simultaneously or at different time points.

Virus stamping thus enables scientists to examine the role of specific genes in clearly defined cells, offering a versatile solution, which can be applied not only in fundamental biomedical research but also, potentially, in gene therapy.

About Botond Roska
Botond Roska is interested in how neurons interact in local neuronal networks to compute behaviorally relevant functions. He studies these processes in the mammalian retina, thalamus and visual cortex. He has also done research into retinitis pigmentosa, a rare disease that leads to blindness. In the course of these experiments, he was able to identify a novel approach to treat the disease.
» More about Botond Roska 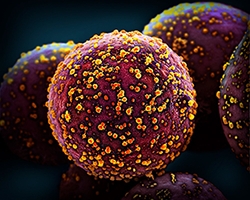 Nanobeads carrying VSVG-pseudotyped lenti viruses. The magnetic beads are guided by an electromagnetic field to target single cells in live animals for viral transduction. The scanning electron microscopy image of the nanobeads was pseudo-colored. Copyright of Image by Rajib Schubert, Daniel Müller, ETH Zürich, coloring of the image by Martin Oeggerli, Micronaut GmbH.