At the beginning of March, the FMI opened an incubator lab to further support the translation of fundamental discoveries to potential application. Currently, two former FMI PhD students, who are in close contact with the Biozentrum of the University of Basel, develop an idea for biomedical translation based on their research results on DNA repair. On Thursday, they are hosting a mini-symposium with external experts

A discovery published in Nature Structural and Molecular Biology in 2017 is the starting point for a proof of concept study pursued at the FMI by two former PhD students, Michael Hauer and Andrew Seeber. In this publication, the young scientists identified a novel important process that helps safeguard DNA integrity. They found that a fraction of histones was degraded upon DNA damage, and amassed evidence that this would facilitate the repair by homology-driven recombination, at least in budding yeast.

Histones built up the spools around which DNA is wound and organized into chromatin, sometimes tighter, sometimes less tight. They define how accessible DNA is for the many proteins that interact with DNA, including the repair machinery. In an elaborate study, the FMI scientist showed that the cellular levels of histones drop by 20 - 40% in response to DNA damage in budding yeast. These histones are evicted from DNA and are concomitantly degraded. As a consequence, chromatin is less compacted and becomes more accessible. They showed that this in turn enhances repair by recombination mediated mechanisms.

Through the identification of CRISPR-Cas9 as a means for gene editing in 2012, repairing mutations in human cells has become reality. It opens unprecedented possibilities for gene therapy and personalized medicine. However, it turns out that efficient homology directed repair is still one of the biggest limitations for CRISPR-Cas9 mediated gene editing and its application in gene therapy.

To overcome this hurdle, many scientists work on improving CRISPR-Cas9 by modifying the components of the bacterial Cas9 system. Hauer and Seeber, however, propose a different approach. "We have shown that one can greatly increase repair by homologous recombination by making the cell's genome more accessible to the editing machinery," Hauer explains. "Simply put, if reverting a mutation by gene editing is like breaking into a bank vault with a drill, then one way to speed up the process is to get a better drill. Our method, however, is equivalent to changing the composition of the vault from iron to wood."

Their idea has gained the scientists support from BRIDGE and the Gebert Rüf Stiftung in Switzerland. BRIDGE is a joint program run by the Swiss National Science Foundation and Innosuisse - the Swiss Innovation Agency. BRIDGE's Proof of Concept program is aimed at young scientists with basic research results that they want to develop into useful tools.

As a first step, Hauer and Seeber now adapt and refine their findings to human cells. Andrew Seeber explains: "We would now like to see if this phenomenon of damage-induced histone degradation in yeast also holds true for higher organisms. Does making DNA more accessible also enhances the rate of genome integrations in human cells? If yes, this research could become a fundamental aspect of genome editing, applicable not only to CRISPR-Cas9 but also to any gene editing technologies yet to come." In addition, the scientists want to test a number of small molecules for their ability to increase accessibility of DNA in the context of gene editing and enhance CRISPR-Cas9 editing efficiencies in human cells.

More about the research 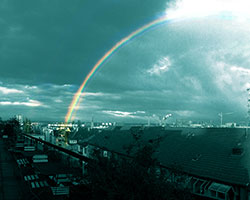