Long non-coding RNA genes give away some of their secrets

A group of researchers coordinated by Alex Tuck from Marc Bühler’s lab wanted to learn more about the role of long non-protein-coding RNAs (lncRNAs); these eukaryotic RNAs lacking protein-coding potential were first described about 15 years ago, but still little is known about their biological significance. The new FMI study not only provides more clarity about the mechanisms by which lncRNAs work, it also offers new tools to further experiment with this special type of RNA – and it represents a nice example of collaboration.

There are a number of open questions about lncRNAs, notably which of the thousands of lncRNA genes are functionally relevant, and whether they function as DNA elements (for example like an enhancer) or via their RNA products.

The researchers around Tuck took a three-step approach to investigate these open questions, using various cutting-edge technologies. First, they profiled mouse embryonic stem cells and neural precursor cells at single-cell resolution to reveal lncRNA expression in specific cell types, cell subpopulations, or cell cycle stages; this allowed them to predict 16 of the most important lncRNA genes. For this part of the study, a collaboration with the European Bioinformatics Institute and Wellcome Trust Sanger Institute was essential for single cell RNA-sequencing and data analysis.

Focusing on these 16 genes, the team then analysed their effects on gene expression – either in cis (involving neighboring genes) or in trans (involving distant, unlinked target genes) – using two different technologies: they produced cell lines in which the lncRNA genes were completely deleted, to see the effect on gene expression when the whole lncRNA gene is gone. In parallel, they developed a self-cleaving ribozyme approach that would not alter the DNA of the lncRNA gene but only its RNA transcript in order to test the function of the RNA product. For the latter innovative approach, the team was helped by researchers from the Novartis Institutes for BioMedical Research (NIBR).

The results of the study shed some light on the mechanisms used by lncRNAs to regulate gene expression. They show that although many lncRNA genes function in trans, up to a third of lncRNA loci act in cis to modulate the expression of neighboring genes; in that case, the RNA product may not be required. Consistent with this idea, using a third approach the team found that many lncRNAs are quickly degraded in the cell. Therefore, the study clearly highlights the importance of the role of lncRNA genes as DNA elements and suggests that the role of the RNA product has so far been overestimated.

More work needs to be done to understand the role of these enigmatic lncRNAs. Investigators can build on the results of the Tuck study; in addition, they now have at hand new cutting-edge technologies to experiment with lncRNA gene functions.

About Life Science Alliance
This study was published in Life Science Alliance, a new global, open-access, editorially independent, and peer-reviewed journal launched by an alliance of EMBO Press, Rockefeller University Press, and Cold Spring Harbor Laboratory Press. Life Science Alliance is committed to the publication of valuable research from across all areas in the life sciences in a way that is: 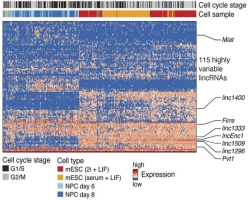