Work published by Isabella Marcomini and the Gasser laboratory sheds light on how repeat sequences found in the DNA of eukaryotic genomes can prevent accurate repair of DNA breaks, leading to dangerous chromosomal rearrangements.

Repeat sequences make up nearly 70% of the human genome. While their function is unclear, it is well established that repeats are a source of genomic instability. In particular, when repeats are near a DNA double-strand break, they can lead to inappropriate translocations, which in turn can contribute to oncogenic transformation. The repetitive TG-rich sequences found at chromosome ends - so called telomeres, are thought to be an exception to this. Their role is usually beneficial because they help to prevent chromosomal fusions, a common type of DNA repair.

In a paper published September 4 in Cell Reports, Marcomini et al. set out to understand how telomeric repeats influence double strand break repair when they are internal, that is, not at the end of a chromosome. For this, Marcomini built an artificial construct in yeast: she inserted a telomeric sequence on one side of an endonuclease cleavage site, at an internal locus along a chromosome far from the telomere. She then induced the break and checked to see how the two sides of lesion were repaired - one side terminating in repeats, the other without. While the break was repaired on both sides – allowing the yeast cells to survive – the repair mechanisms were completely different. On the end containing telomeric sequence a complex that holds the two sides of a break together, the MRX complex, failed to bind. Consequently, the most common pathway for repair for this type of lesion, imprecise end joining, could not occur. The end also failed to be processed into a single strand DNA overhang, which is a prerequisite for an alternative type of repair, homologous recombination. The far side of the break, on the other hand, was resected and began to move wildly, favoring a molecular search for a homologous sequence, to allow repair by recombination. That search allowed the resected end to invade a patch of homology on another chromosome, leading to an ectopic translocation, a common form of chromosome instability in cancer cells.

These repair phenotypes were clearly dependent on the insertion of the telomeric repeat. Internal telomeric sequences are common in the human genome and have been correlated with a type of chromosomal translocation that drives cancer development, yet it was unclear how these translocations occurred. “Initially I was only interested in understanding more about telomeric identity,” says Marcomini. “It’s only towards the end of the project that I observed the cancer-related phenotypes and realized that we might have a pretty big story here, with a medical impact.” More work needs to be done to better understand the mechanisms underlying the DNA repair phenotype she observed and to confirm that similar mechanisms drive oncogenic transformation in mammalian cells. 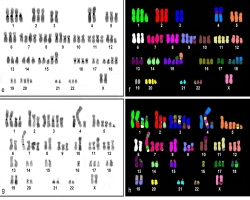