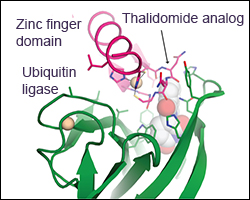 Nicolas Thomä's group at the FMI has joined forces with the group of Benjamin Ebert at Harvard’s Broad Institute to show how thalidomide analogs mediate degradation of many more proteins than previously anticipated. These proteins – zinc finger transcription factors – play a role in cancer and developmental diseases but are difficult drug targets. The new study, published in Science, suggests that thalidomide analogs can be rationally designed to target this challenging class of proteins.

An "undruggable" group of proteins

Most FDA-approved small molecule drugs inhibit enzymes - biology’s protein machines that catalyze chemical reactions. However, many proteins in biology are not enzymes, but they nonetheless play critical roles in health and disease. Among these, transcription factors are particularly interesting drug targets because they act as the on/off switches of gene expression, processes that can cause developmental diseases and cancer when they go wrong.

Until recently, transcription factors have been considered ‘undruggable’ because they lack catalytic active sites for drugs to bind. But in 2014, thalidomide and its analogs – important treatments for multiple myeloma and other blood cancers – were found to inactivate transcription factors using a previously unknown mode of action. These drugs did not inhibit the function of their target proteins, but instead recruited them to an E3 ubiquitin ligase, which flags proteins as garbage causing their removal by the waste disposal system of the cell.

In their recent study, published in Science, Thomä’s and Ebert’s teams have explored whether other transcription factors could be degraded by a similar mechanism. Their results show that modifications to thalidomide result in degradation of different zinc finger transcription factors – a first step towards designing future drugs.

Having found that a single zinc finger domain was sufficient to make a specific transcription factor susceptible to drug-mediated degradation, the researchers investigated whether other such examples existed. By creating a library of all known zinc finger domains from humans and linking them to a fluorescent protein stability marker, the researchers identified a total of 11 zinc finger motifs that led to degradation in cells. “11 out of 6,500 zinc fingers was a good start,” explains Georg Petzold, a postdoc in the Thomä lab and one of the two first authors of the study, “but protein degradation is a multi-step process and recruitment to the E3 ubiquitin ligase does not necessarily lead to degradation.”

So the researchers examined the step preceding zinc finger degradation – recruitment to the CRL4-CRBN ubiquitin ligase –and identified another 150 additional zinc fingers that bind the ligase in vitro. “Although these zinc fingers were not degraded in cells, these results were exciting because they extended the number of potential targets to many more than just the first 11,” explains Nicolas Thomä.

Surprisingly, their structural analysis revealed that specificity between the drug and a zinc finger could depend on as little as one amino acid that formed a side chain contact with the drug, presenting an opportunity to design drugs that could target different zinc fingers. To test this hypothesis, the researchers repeated the cellular screen with two more recent thalidomide derivatives and found that these different drugs degraded distinct sets of zinc fingers.

“We not only identified new thalidomide analog targets, but also showed that it might be possible to create compounds that selectively degrade certain zinc fingers,” says Petzold. “The zinc finger library screens are good schemes to screen for such compounds; there is a lot of potential for drug development!”


About Nicolas Thomä
Nicolas Thomä is a Senior Group Leader at the FMI. He is interested in the machinery that controls the integrity of the DNA. He combines X-ray crystallography and cryo-electron microscopy with biochemical and biophysical studies to better understand large protein complexes involved in crucial cellular functions such as DNA repair, telomere maintenance and epigenetics in health and disease.
» More about Nico Thomä