Upon exit from self-renewal, embryonic stem cells differentiate into different types of tissues – a process regulated by various complex mechanisms. Recent work published by the Betschinger group shows the importance of the lysosome – which is directly associated with cellular metabolism and nutrition – in developmental progression. The researchers could also link their findings to a human developmental disorder.

At an early stage of development, a small number of cells in the embryo acquires the ability to generate all cell types of the adult animal. This property is called pluripotency and captured in self-renewing embryonic stem cells (ESCs). How pluripotent cells lose their identity and differentiate into specialized tissues is not well understood.

Florian Villegas, a PhD student in the Betschinger group, and collaborators wanted to know more about this process. They conducted a genome-wide CRISPR/Cas9 screen for genes that are essential for mouse ESCs to exit self-renewal, which revealed that the majority of the identified genes belonged to a signaling cascade that acts at lysosomes – organelles that serve as the cellular digestive system and produce building blocks for cell growth. In particular, the researchers showed that activation of the pathway by lysosomes inhibits the transcription factor Tfe3, a potent differentiation brake pedal.

"It is conceivable that lysosomal signaling in ESCs constitutes a metabolic differentiation checkpoint that anticipates energy requirements faced during development," says Joerg Betschinger. "In other words, if energy sources are limited, a pluripotent cell may prefer to self-renew rather than to initiate developmental progression."

Strikingly, this mechanism can be related to a human disorder. While Villegas' studies were ongoing, the Betschinger group was approached by clinical geneticists from Dijon, France. The FMI scientists were asked to participate in a program designed to identify the genetic causalities of a novel mosaic human developmental disorder. They found that Tfe3 was mutated in several of the patients, making it resistant to inactivation by lysosomal signaling. Affected cells consequentially believe that energy sources are scarce. It is likely that mutations in these patients are acquired at developmental stages past pluripotency. This prompted the researchers to investigate further and show that Tfe3 also controls somatic progenitor cells, suggesting a conserved mechanism that links nutrition and differentiation.

"This project is an excellent example of internal and external collaboration; our collaboration with the group of Laurence Faivre in Dijon was particularly fruitful," concludes Betschinger. "It is rewarding to see that our research can be directly linked to human disease." 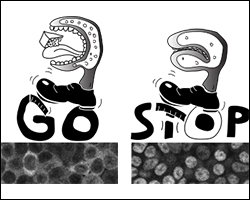