Transcription of our genes mostly begins in regions of the genome called CpG islands. These are rich in the dinucleotide CpG (thus the name), critical for gene activity and devoid of DNA methylation. Despite the relevance of CpG islands, it is unclear if the CpG dinucleotide itself contributes to their activity. This is what researchers from the Schübeler group investigated. Their findings refine our understanding of mammalian promoter regulation.

Gene expression is controlled at multiple levels, including recognition of specific DNA sequences by transcription factors, packaging of DNA in chromatin and methylation of DNA. While the majority of transcription factors recognize complex motifs of several nucleotides, it is largely open whether low complexity sequence features, such as dinucleotides, contribute independently to gene activity.

CpG stands for Cytosine-phosphate-Guanine and is the most studied dinucleotide in mammalian genomes. In mammals, the majority of CpGs are methylated, while unmethylated CpGs are concentrated in specific regions called CpG islands. These make up two thirds of all mammalian promoters and most transcription initiation events occur at this class. Whether the CpG dinucleotide plays a role in transcriptional regulation is experimentally difficult to address as it requires to measure a large number of sequence variants to obtain a conclusive answer.

PhD student Dominik Hartl from the group of Dirk Schübeler developed a reporter assay that quantifies transcriptional output as a function of sequence mutations in promoters. He inserted hundreds of different promoter mutant sequences into the same genomic site in mouse embryonic stem cells and measured their transcriptional activity. The sensitivity and throughput of his approach allowed precise quantification of changes in transcriptional activity.

Hartl and collaborators - whose study was recently published in Genome Research - could unequivocally show that CpG dinucleotides are not sufficient but necessary for full activity of CpG islands. This provides functional evidence to previous correlative observations between high CpG density, active chromatin marks and high expression, as well as previous findings by the group that only CpG-dense sequences are free of DNA methylation when inserted into the genome.

"The connection we see between CpG density and transcriptional activity at CpG island promoters reveals a function of dinucleotide frequencies outside of complex transcription factor motifs" says Dirk Schübeler. “Such low complexity motifs or resulting sequence features such as DNA shape likely operate as an additional means of fine-tuning gene activity. Moreover, our study provides an experimental framework for rigorous testing of other sequence features and the effect of mutations in regulatory regions that are linked to disease." 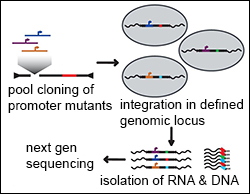