Oncogenic risk arising from the loss of repeat silencing

The heterochromatin of eukaryotes contains repetitive DNA, which can lead to genome instability when transcribed. These sequences are normally silenced through the methylation of lysine 9 in histone H3 (H3K9me). Researchers from the Gasser group explored the role and importance of H3K9me. In two recent publications, they shed light on how the process is regulated and how loss of H3K9me renders cells sensitive to the loss of the breast tumor suppressor, BRCA1.

It is unclear why, but our genomes are riddled with repetitive DNA. Some repeats are remnants of viral invasion, but others are simple arrays of repeating motifs, sometimes only three or four letters long. These repeats do not encode proteins nor serve as gene regulatory elements, and they are transcriptionally silent most of the time, thanks to the methylation of lysine 9 in histone H3 (H3K9me). Earlier work by the Gasser group had shown that the loss of H3K9me led to promiscuous transcription of repetitive DNA, triggering extensive genome instability.

The nematode C. elegans has been extremely useful to study H3K9me, thanks to the reduced complexity of its histone modifying enzymes. Whereas humans have six to eight enzymes, C. elegans has only two H3K9 specific histone methyltransferases: SET-25 and MET-2, and the two have distinct functions. MET-2 catalyzes the mono and di-methylation of H3K9 and has the unique ability to silence simple repeat sequences. When MET-2 is lost, the worms become sensitive to temperature stress and show germline sterility. SET-25 represses genes and retroviral-like repeats, but its loss is largely compensated by MET-2.

In order to understand the physiological function of H3K9me, the Gasser group screened for genes that allow the survival of MET-2-deficient worms and identified both, genes involved in surviving replication stress and genes involved in clearing away RNA.
“Our key finding is that cells that have lost the ability to silence satellite repeats are highly dependent on BRCA1 – the most prevalent breast cancer predisposition gene in women – to prevent the accumulation of toxic RNA species and preserve genome integrity,” says Jan Padeken, the first author of the article that has just been published online in Genes & Development.

The researchers showed that together the loss of H3K9 methylation and BRCA1 is catastrophic, leading to apoptotic death of affected cells. Interestingly, H3K9me inhibitors are widely used in cancer treatment but have not yet been applied to BRCA1-deficient tumors specifically. “Since the function of H3K9me is conserved in higher organisms, the findings in this study suggest that treating cancer with H3K9me inhibitors may trigger the de-repression of satellite repeats, driving additional genomic instability. In cancers that are mutated in replication fork recovery factors – like BRCA1 –, the additional genomic instability brought by H3K9me inhibitors may be therapeutically exploited to kill the cancer cells,” says Susan Gasser. Recent work in mammalian tumors reinforces the notion that satellite repeat expression is oncogenic. This means that the pathways that silence repeats through H3K9 methylation are essential tumor suppressors. 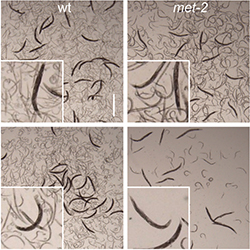