The organization of chromatin in the three-dimensional space is complex and requires the help of many proteins, including CTFC. Researchers from the group of Marc Bühler have identified a new player in the process: the transcription factor ADNP. In a recent study, they show that ADNP competes with CTFC, acting as a local modulator of chromatin looping.

In a 2018 study, the Bühler group described a previously unknown protein complex called ChAHP, made up of the proteins HP1, CHD4, and ADNP (activity-dependent neuroprotective protein); the latter is a transcription factor that is essential for embryonic development and – when mutated – is involved in the Helsmoortel-Van der Aa syndrome, a complex neurological developmental disorder. The FMI scientists uncovered the gene silencing role of ChAHP and showed that, when the complex is inactivated due to a mutation in ADNP, genes get mistakenly expressed – thereby taking a major step towards elucidating the mechanisms underlying Helsmoortel-Van der Aa syndrome.

Fabio Mohn and Lucas Kaaij from the Bühler group built on that study to understand the function of ADNP (as part of the ChAHP complex) in the context of chromatin organization in mouse embryonic stem cells. Their study has recently been published in Cell.

Cohesin and CTCF are key players in three-dimensional chromatin organization. While the protein complex cohesin can create a ‘ring’ around a piece of DNA, which causes DNA loop extrusion, the transcription factor CTCF acts as a barrier to the progression of cohesin on DNA, thereby separating adjacent DNA loops and creating the so-called TADs (topologically associating domains), see graph. However, not all CTCF binding sites are involved in loop formation, and additional factors – of which not much is known – must be involved in CTCF binding and subsequent TAD formation.

The Bühler study sheds some light on these mechanisms by highlighting the role of ADNP. Mohn, one of the two first authors, explains the main results: “We demonstrated that ADNP competes with CTCF for a common set of binding motifs and counteracts the stable association of CTCF with DNA; CTCF can then not fulfill its role as a loop extrusion barrier anymore. As such, ADNP acts as a local modulator of chromatin looping.”

The researchers then set out to understand why ADNP is selectively present at about 15’000 CTCF binding sites, knowing that there are about 90’000 in total. They found that ADNP almost exclusively binds SINE B2 transposable elements that acquired a CTCF binding motif. But contrary to CTCF, ADNP preferentially binds less diverged – and therefore evolutionary ‘young’ – SINE elements. Mohn gives a potential explanation: “Our findings support a model where ADNP can ‘buffer’ novel CTCF binding sites that emerged through the insertion of SINE elements. Therefore, we speculate that ADNP plays a role in the maintenance of evolutionary conserved spatial chromatin organization.”

The results also provide further insights into the putative molecular mechanisms underlying Helsmoortel-Van der Aa syndrome, which involves mutations in ADNP. In addition to gene-specific effects, the diverse phenotypes reported in patients could be the consequence of effects triggered by local perturbations of 3D chromatin architecture when ADNP is malfunctioning. “It will be very exciting to further study the in vivo role of ADNP and the contribution of 3D architectural alterations in the progression of Helsmoortel-Van der Aa syndrome in suitable mouse models and in human cell lines,” Mohn concludes. 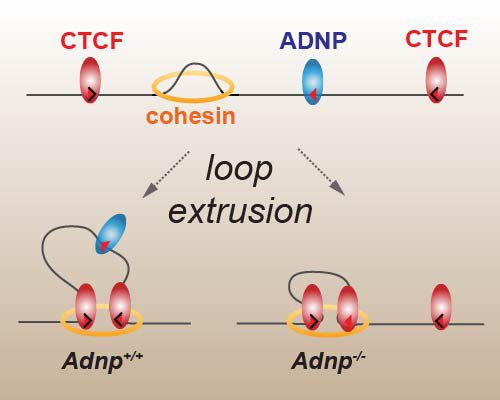