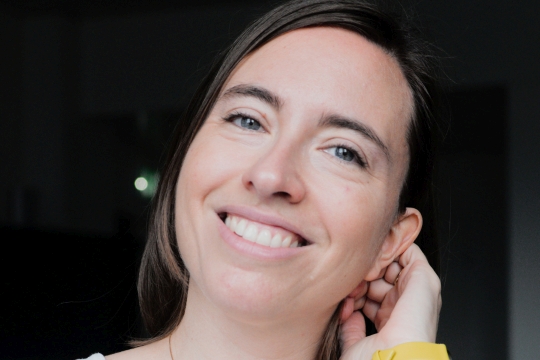 Daphne Cabianca, originally from Italy, has been a postdoc in Susan Gasser’s lab since 2013. As for many postdocs, reconciling the demands of science, family and living abroad has been a challenging experience. During her time at the FMI, Daphne became a mother, and she now believes that surviving sleep deprivation and temper tantrums is an accomplishment just as great as publishing her research. In this interview, Daphne tells us about her career path, and the personal transformation of becoming a mother along the way.

How did you become a scientist?
When I was attending the scientific lyceum, my favorite subject was math. But one day, while reading the encyclopedia of US universities, I was intrigued by a course entitled “Molecular Biology”. Those words stuck in my mind and, when the teacher started to explain genetics, Mendel, etc., I knew that was what I wanted to do in my professional life. At the final school examination, when the teachers asked me about my career plans and I replied, “I’ll study biology!” They were clearly disappointed; I was an excellent student, and with my grades I could have studied medicine, which to them was more prestigious than biology. But I didn’t want to study medicine, I wanted to do biological research. That’s what I did, and I’ve never regretted the decision I made back then.

Why did you choose the FMI for your postdoctoral research?
During my PhD, I was working on epigenetics in mammalian cells and was fascinated by nuclear architecture. Susan Gasser is very well known in this field; when I learned that she had two postdoc openings – which is rare – I decided to apply. To my surprise, she replied an hour after my application, inviting me for an interview. I had also attended interviews in Italy, and when I mentioned Susan Gasser and the FMI as an option, the group leader told me that if I had the opportunity to join Susan’s team, I should definitely go for it! I really liked the Gasser lab and the possibility to work on worm genetics in the context of a differentiating organism. So, I decided to join the group and to change model organisms – from mammals (during my PhD) to worms (during my postdoc). This led to comments from former colleagues such as, “Why would you work with worms – you’re going back in evolution!” I guess some people are motivated by immediate applicability, but for me there is also the beauty of discovery per se.

How is your work-life balance?
When I started my postdoc, I quickly fell into overworking. On weekdays, I worked excessively – 12 hours a day or more. I was living alone, my partner was still in Milan, and without family constraints it was very easy to center my life around work. For example, I could go for coffee breaks at 5 pm if I wanted to, because I could stay longer and finish my tasks later. Despite working hard, I always made sure I was nurturing my social life with friends and colleagues, going out for drinks, movies, etc. The postdoc project was challenging: I was a pioneer in the lab, going for a tough non-automated screen in C. elegans larvae. I was stressed, determined to prove I was a good scientist. I had a great publication from my PhD, and yet I started questioning my capabilities – it was a difficult time. When my partner moved to Basel, it helped me to have a more balanced lifestyle. Later, when my son was born in 2016, everything changed again. Having a child is a revolution! My son gets the best and the worst out of me. I thought I was very patient, and suddenly I realized I’m not! And that I really like to be in control!

Having a child as a postdoc can be challenging. What kind of support did you have, and was it effective for your career during your maternity experience?
I was fortunate to have Véronique Kalck, the technician from the lab, working on my project during my maternity leave. She was very helpful, and I’m grateful to Susan for having set that up. But when I went back to the lab, things were much slower. My son was waking up frequently during the night for many months, and I became exhausted. For me the trick was to understand that I needed to be flexible and not put so much pressure on myself. It even happened that I took a day off simply to go back home to sleep! I really appreciated the fact that Susan understood my situation, and that I needed time to recover in order to be productive. Someone told me that I’ve become more confident in recent years. I think a big part of that came with motherhood. It helped me to see and develop my potential because gradually I realized that, although it’s difficult, I could manage, I could find a new balance and develop new skills, including firmness. And I also learned to ask for help when I can’t manage by myself.

Can you highlight two major achievements from your time in Basel?
One is publishing my work in Nature; and the second is getting my son to sleep at night! Perhaps the latter is more important, since all my other achievements depended on being able to sleep myself.

Tell me about the people who mentored you during your stay at the FMI.
Susan is one of the few true leaders I’ve ever met. She was very busy being a group leader and director, but she always made an effort to meet all of us on a regular basis. In the beginning, I was overwhelmed because I had a lot of freedom (and responsibilities) compared to my time as a PhD student. A year and a half after starting my project, I had a moment of doubt. I needed strategic advice and I turned to Susan. She discouraged me from dropping the project, but told me it was ultimately up to me to decide. That was a moment of growth for me. At the same time, another key person was a senior scientist in the lab, Kenji Shimada. I asked him, “How do you know if it’s time to drop a project?” He told me, “When you’re not interested in it anymore.” I thought, “Oh, no, I’m still very interested…” and so I persisted.

Do you remember a moment of excitement during your project, when you looked at the data and knew there was something special?
A big inspiration came from discussing my project with colleagues from the Bühler lab. They gave me an idea for a hypothesis, which was not very laborious to test. There was one clear effect, and I realized that I had something to explain a mechanism. Also, during the manuscript revision phase, I had great suggestions for experiments from the reviewers. Many turned out to support my hypothesis. That was all exciting and reassuring.

What did you like most about working at the FMI?
The FMI is a fantastic place for research. It is relatively small as an institution, so it’s easy to meet other people. You know all the groups and have a good idea of what they are doing. The technology platforms are amazing and easily accessible. I mostly used microscopy, C. elegans, proteomics and bioinformatics – and getting support has always been very straightforward.

You’ve spent the last six years in Basel, and now you’re moving to Munich. What will you miss?
The fact that Basel is such a safe and rather small city – you can go everywhere by bike, reaching parks, river and work within 15 minutes. Being at the border with France and Germany is also nice; it allows you to experience different cultures – or simply buy different supermarket products. I also really like that in Switzerland, citizens follow rules without being seen as “uncool”. And I will definitely continue eating cheese fondue and going for hikes!

Daphne did her undergraduate studies in Pavia, Italy, and took her PhD at the San Raffaele Scientific Institute in Milan. In 2013, she moved to Basel, joining Susan Gasser’s group as a postdoctoral fellow. Her next career step will take her to Munich, where she will be a junior group leader at the Institute of Functional Epigenetics, HMGU. She is married and has a 3-year-old son.
Daphne’s research was recently published in Nature. (Read a summary of the study)