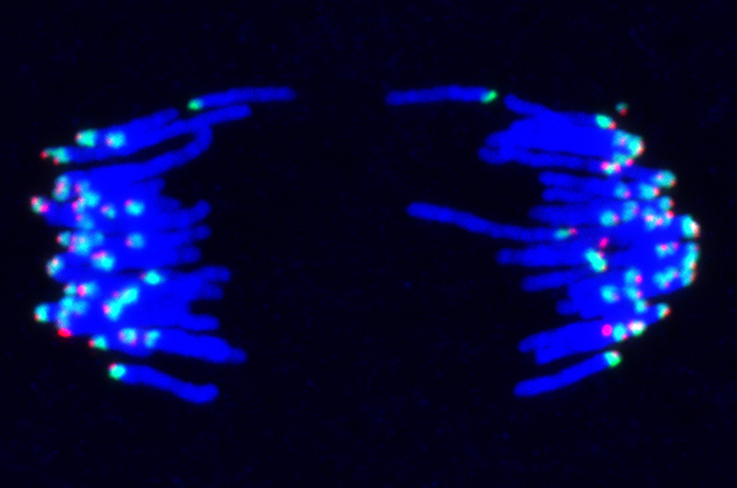 Chromosomes of a mouse one-cell embryo at anaphase of the first cleavage division stained for major (green) and minor (red) satellites sequences underlying pericentromeric and centromeric heterochromatin regions. The embryo is deficient for DAXX. In the upper right, one can see a broken mini-chromosome: its original long arm remained behind between the two large sets of chromosomes upon their movement to opposite poles.

The Peters group studies chromatin formation and regulation in mammalian germ cells and during early embryonic development. Now researchers from the group identified a novel pathway that is essential for maintaining the integrity of heterochromatin, and therefore for securing chromosome stability.

Chromatin - made up of DNA wrapped up around histone proteins - plays a major role in gene regulation by modulating the accessibility of transcription factors to their target sequences in the genome. In eukaryotes, multiple chromatin-modifying proteins and pathways have evolved to control and fine-tune the level of chromatin accessibility versus compaction in order to safeguard genome integrity, define cell identity and guide development.

Two postdocs in the group of Antoine Peters, Zichuan Liu and Mathieu Tardat, focused their research on the de novo formation and function of the dense heterochromatin regions flanking the centromeres on chromosomes in very early mouse embryos, just after fertilization. Later in development, these so-called pericentromeric constitutive heterochromatin regions (or PCH) are transcriptionally repressed via the well-known and evolutionarily conserved histone H3 lysine 9 (H3K9) methylation pathway, which controls proper chromosome segregation during cell division.

In one-cell embryos of mice, the formation and function of PCH on chromosomes of maternal origin is indeed controlled by H3K9 trimethylation inherited from oocytes. Conversely, chromatin at PCH on paternal chromosomes had undergone major reorganizations during male germ cell development and shortly after fertilization, resulting in the absence of H3K9 methylation until the eight-cell stage of embryo development. Fascinatingly, the fertilized embryo has adapted to the absence of the H3K9 trimethylation mark by the recruitment of another major chromatin-based repression complex to paternal PCH. The Peters group had previously shown that the Polycomb Repressive Complex 1 (PRC1) defines this alternative heterochromatic and transcriptionally repressed state. It had also been shown that paternal (but not maternal) PCH contains the histone H3.3 protein. Paradoxically, this is a histone variant that is normally found in the genome at canonical H3K9 trimethylation-containing heterochromatin.

In the current study - recently published in the EMBO Journal - Liu and Tardat resolved this conundrum and described in detail a novel pathway that preserves the integrity of chromatin at paternal PCH in early mouse embryos. They identified the histone chaperone DAXX and the chromatin remodeling enzyme ATRX as two new components of paternal PCH that control the local incorporation of H3.3. Recruitment of DAXX and ATRX to paternal PCH is dependent on SUMOylation of CBX2, a PRC1 component. SUMOylation is a post-translational modification that is involved in various cellular processes and which functions here as a molecular glue between CBX2 and DAXX. The researchers showed that when DAXX or key components of PRC1 were absent, the H3.3 histone could not be incorporated, which resulted in decompaction and breakage of chromatin at PCH of exclusively paternal chromosomes, and their mis-segregation during mitosis. Evgeniy Ozonov, a computational biologist in the group, further discovered that DAXX contributes to the repression of many PCR1 target genes during the development of oocytes.

"We identified a novel molecular pathway and role for Polycomb in ensuring heterochromatin integrity and chromosome stability in mouse early development,” says Antoine Peters. “Our ability to recruit DAXX to many gene promoters in a CBX2 dependent manner supports the view that, beyond oogenesis, the novel pathway may modulate the important gene regulatory function of CBX2 at other stages of development and possibly in disease." 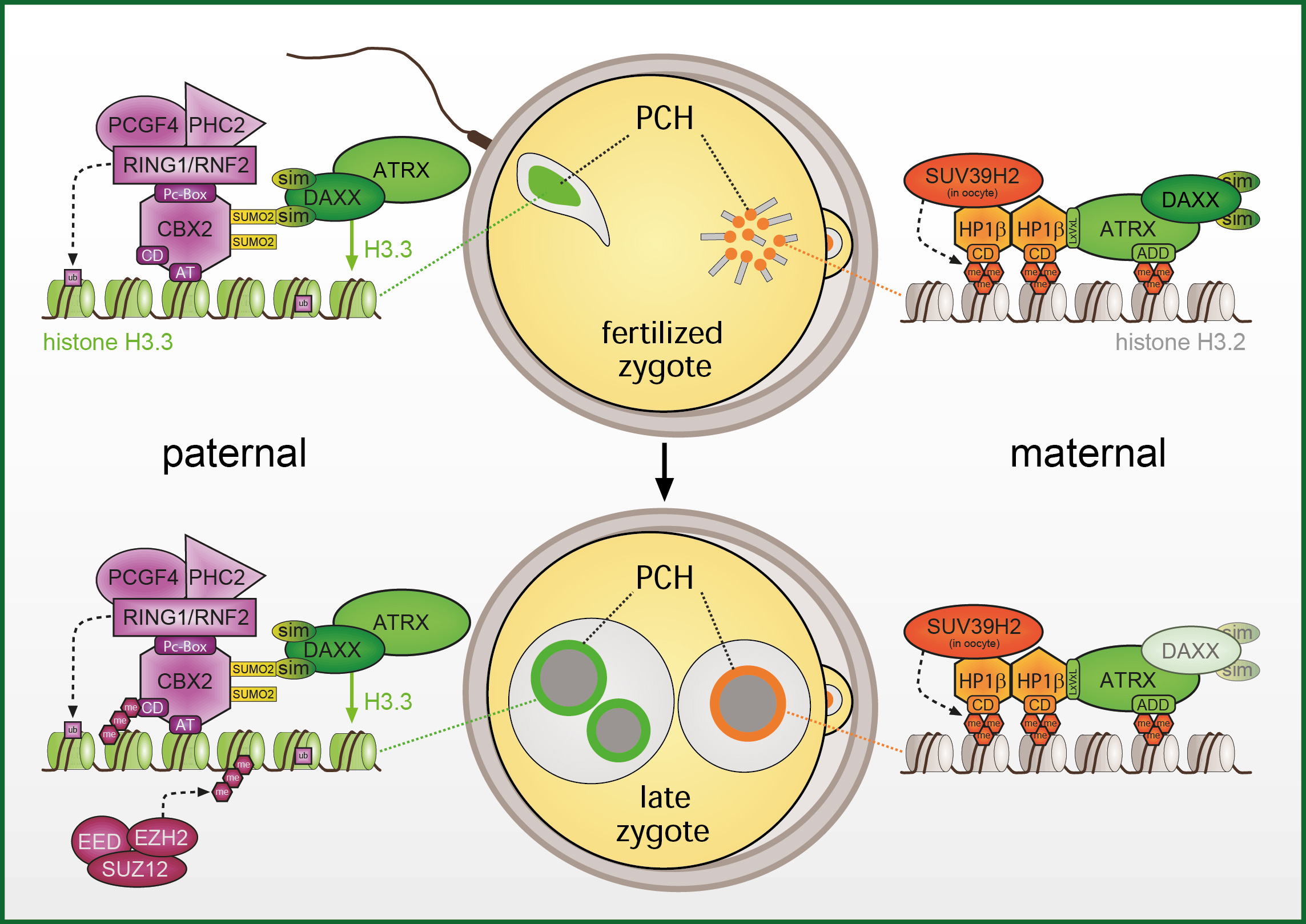 Formation of pericentromeric heterochromatin in early mouse embryos
The cartoon shows the mouse one-cell embryo shortly after fertilization (top) with a decondensing sperm head (left) and maternal chromosomes (right), and just prior to the first mitotic division (bottom) with a paternal pronucleus (left) and a maternal pronucleus (right). Green and orange areas indicate the location of pericentromeric constitutive heterochromatin (PCH) which is specified by by Polycomb Group proteins in the paternal genome and by Suv39h/HP1b proteins in the maternal genome. DAXX and ATRX safeguard chromatin integrity at paternal PCH by driving locally the deposition of H3.3 containing nucleosomes.

Chromosomes of a mouse one-cell embryo at anaphase of the first cleavage division stained for major (green) and minor (red) satellites sequences underlying pericentromeric and centromeric heterochromatin regions. The embryo is deficient for DAXX. In the upper right, one can see a broken mini-chromosome: its original long arm remained behind between the two large sets of chromosomes upon their movement to opposite poles.