The Friedrich Miescher Institute for Biomedical Research shares its sorrow at the sudden and unexpected death of Ruth Chiquet-Ehrismann, Senior group leader of the FMI and Adjunct professor of the University of Basel, on September 4, 2015. With her passing we have lost a very special colleague.

Ruth Chiquet-Ehrismann studied biochemistry before she received her PhD from the ETH Zurich in 1981, working on the structure function relations of fibronectin and fibronectin-promoted myoblast attachment. Ruth moved for her postdoctoral training to the group of Robert Dottin at Johns Hopkins University in Baltimore, where she worked on gene regulation during muscle development. In 1984, she returned to Switzerland and joined the FMI as a postdoctoral fellow in Ed Reich’s group. Ruth was promoted as FMI Junior group leader in 1985, and to Senior group leader in 1993. During her 31 years of research at the FMI she studied the extracellular microenvironment, and the impact of plasma membrane and extracellular matrix proteins on both development and tumorigenesis. She identified, cloned and characterized the functions of two important families of proteins: the extracellular Tenascins, and the Teneurins, large transmembrane proteins that guide embryonic patterning and neuronal development.

Cell-cell and cell-extracellular matrix interactions remained at the heart of Ruth’s research efforts, as she explored how normal cells respond to mechanical stress and why tumor cells fail to respond to their environment. Her insights have provided new targets for therapeutic intervention and furthered the diagnosis of cancer.

Ruth has been a mentor to many young scientists in Basel and around the world. She was an engaged teacher at the University of Basel, where she held an Adjunct Professorship, and served on scientific review boards of both the Swiss Cancer League and the Cancer League of Basel (Krebsliga beider Basel).

We will miss Ruth’s cheerful demeanor, her kind and compassionate interactions with students, postdocs and colleagues, and her steadfast devotion to the rigors of scientific research. We are grateful for all that she gave to the institute and to us as individuals, as we join her family in mourning. 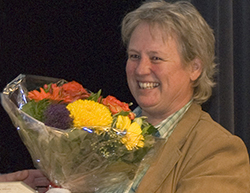