Silvia Arber, Mohamed Bentires-Alj, Pico Caroni and Antoine Peters, leading scientists at the Friedrich Miescher Institute for Biomedical Research in Basel, will each receive one of the prestigious ERC Advanced Grants from the European Research Council (ERC). These research grants are awarded in a highly competitive selection process featuring the best scientists across Europe.

Silvia Arber is an expert in the field of motor circuit function, and investigates the neuronal circuits controlling motor behavior. Her research has provided us with a substantially better understanding of the interplay between brain, spinal cord and muscles and has enabled the assignment of particular movement patterns to specific neuronal circuits. A thorough understanding of these interactions is essential for the treatment of motor disorders. The ERC supports Silvia Arber’s project "Control of Action Diversification by Descending Motor Circuits".
More on Silvia Arber

Mohamed Bentires-Alj holds an interest in the mechanisms that regulate normal and neoplastic breast cell heterogeneity: What causes heterogeneity, how therapy influences it and how one can get around it? Working together with his research group he has identified signaling pathways that influence normal and neoplastic breast stem cells, metastasis, and resistance to targeted therapies at the molecular, cellular, and whole organism levels. The Advanced ERC Grant, STEM-BCPC, focuses on signal transduction and epigenetic mechanisms of breast cell plasticity and cancer. This interdisciplinary project seeks to elucidate the integrated effects of signaling pathways and epigenetics on breast cell fate and tumor heterogeneity, and to leverage this mechanistic understanding into therapy.
More on Mohamed Bentires-Alj

Pico Caroni’s research has substantially contributed to our understanding of how plasticity in the brain relates to learning and memory. In recent years, he and his team showed that upon initial learning processes, synaptic plasticity important for memory consolidation hours later is triggered within minutes. But what happens after that is still unclear: Very little is known about the mechanisms through which memories are defined, edited, stored or even shaped later on. As part of the ERC project, Caroni now wants to investigate how memories are shaped by cellular cascades in memory neurons, experience, and off-line activity inside the brain during several hours after acquisition. These studies will address roles of learning-related plasticity processes in cortical areas and in the hippocampus.
More on Pico Caroni

Antoine Peters is a molecular genetics who has a long standing interest in understanding the role of chromatin and its regulators in modulating the activity of genes and specifying cell identity during germ cell and early embryonic development. His work also focuses on understanding the mechanisms of transmission of epigenetic information from parents to their descendants and the relevance of such inheritance for the fitness of progeny. As part of the ERC funded program he will expand his research to the identification and functional characterization of transcription factors driving the initiation of gene expression in the context of the dynamic chromatin landscape in early mouse embryos.
More on Antoine Peters

FMI and ERC grants: An exceptional success story
The success rate for FMI researchers is impressive: Since the launch of the ERC program, a total of 16 grants have been awarded to FMI researchers at different stages of their career. "For a small institute such as the FMI, this is extraordinary and an impressive example of the exceptionally high-quality research carried out in our institute," said Susan Gasser, FMI Director. "It shows the extent to which FMI is respected in the global research community." 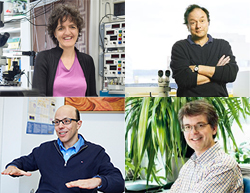 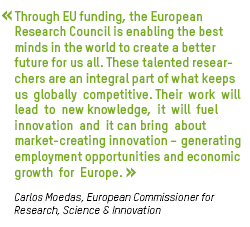