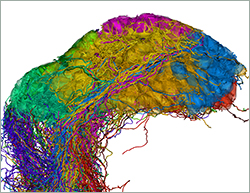 One of the fundamental questions in neuroscience is how neuronal circuits are wired to process information. The research group led by Rainer Friedrich has developed new methods to determine the complex morphology of densely packed neurons and their synaptic connections by 3D electron microscopy. As reported in Nature Neuroscience, these methods allowed them to reconstruct the entire olfactory bulb of a zebrafish larva, comprising more than 1000 neurons. They found that neuronal projections in the olfactory bulb are widely distributed but not randomly organized. Rather, the network contains modules that receive similar input, which are more likely to be interconnected than others. This study marks a step forward in the emerging field of connectomics.

The power of the brain arises from teamwork: although each neuron is slow compared to a computer, networks of neurons outperform computers on complex tasks. Networking among neurons depends on the pattern of synaptic connections. This pattern – defining “who can talk to whom” – directs information processing in the network. However, mapping synaptic connectivity has been extraordinarily difficult. Researchers working with Rainer Friedrich, a Group Leader at the Friedrich Miescher Institute for Biomedical Research, have now developed methods to facilitate this task. They were thus able to reconstruct virtually all the neurons in the olfactory bulb of a zebrafish larva – more than 1000 in total. Friedrich comments: “The completeness of this reconstruction allowed us to uncover principles of network organization that cannot be found by analyzing one neuron at a time.”

Nanometer resolution throughout large volumes
More than a century ago, Camillo Golgi and Santiago Ramón y Cajal revolutionized modern neuroscience by visualizing the intricate morphology of individual neurons in brain tissue. But, with only a few exceptions, it has so far been impossible to reconstruct dense networks of neurons and their synaptic connections. One of the fundamental problems is that, while synapses and fine processes of neurons can be smaller than 100 nanometers, entire circuits are orders of magnitude larger. Thus, dense reconstructions of networks need imaging methods that offer nanometer resolution throughout large volumes. This goal came within reach when automated methods for large-scale 3D electron microscopy (EM) were developed a few years ago. Adrian Wanner, a PhD student in Rainer Friedrich’s group, has now invented and patented a new sample preparation technique that paves the way for the application of these methods to biomedical problems. According to Christel Genoud, who heads the EM facility at the FMI, “We can now image the ultrastructure of neuronal circuits at much higher speed and quality than before, which makes it possible to really go large-scale.”

A robust workflow for tracing neuronal morphology
Another challenge is to trace the morphology of all neurons and identify their synaptic contacts. This is not only a massive task but also a complex image analysis problem, which cannot yet be solved by computers. Adrian Wanner therefore recruited external helpers and set up a company (Ariadne Service GmbH) to facilitate the management of these efforts: “By organizing helpers in a company, we established a sustainable structure which will allow us and other scientists to benefit from professional tracing services in the future.” In addition, he solved a variety of other challenges in the workflow. The end result was a complete pipeline to go from a wet brain sample to a digital reconstruction of a circuit.

Reconstructing the entire olfactory bulb
Using this pipeline, Friedrich and his collaborators reconstructed virtually all the neurons in the olfactory bulb of the zebrafish larva. They discovered two new cell types and mapped the distribution of synapses throughout entire cells. Importantly, their dense reconstruction allowed them to analyze the structure of the network as a whole. Wanner explains: “We found that projections between the functional modules of the olfactory bulb – the glomeruli – are not organized randomly. Rather, glomeruli that receive input from sensory neurons expressing similar receptors are more often linked than others. This is important because it allows us to understand principles of information flow in the olfactory bulb.”

The neuroscientists’ next goal, says Friedrich, is to measure neuronal activity patterns before reconstructing the circuit. Peter Rupprecht, another PhD student in the group, has recently developed an optical technique to measure neuronal activity of >1500 neurons simultaneously in 3D. Friedrich comments: “We can now combine this method with 3D-EM to directly relate the structure of complex neuronal circuits to their function.”

On Rainer Friedrich
Rainer Friedrich is a group leader at the FMI and Professor at the University of Basel. He is interested in the strategies that the brain has developed to extract, store and utilize information about its environment. He and his team are using the olfactory system of zebrafish as models to study the function of neuronal circuits and their dysfunction in disease.
» More about Rainer Friedrich 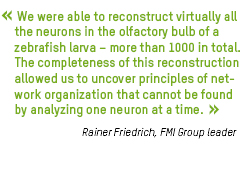 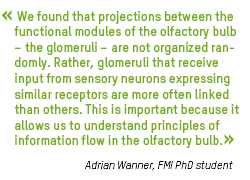