Double honors for the Bentires-Alj lab

Mohamed Bentires-Alj of the FMI has been elected to the membership of the European Molecular Biology Organization (EMBO). He is among the 58 outstanding life scientists from Europe and elsewhere newly elected for EMBO. Earlier this year, Shany Koren, a postdoctoral fellow in Bentires-Alj?s group, received the Bruno Speck Award.

"I am delighted by the addition of 58 outstanding scientists to our membership […]", EMBO Director Maria Leptin stated. "By serving the principles of excellence and integrity through their views and actions, they make invaluable contributions to science and society."

In recent years, Mohamed Bentires-Alj has made significant contributions to advances in his field and to cross-pollination with other fields and communities.

Mohamed Bentires-Alj holds an interest in the mechanisms that regulate normal and neoplastic breast cell heterogeneity: What causes heterogeneity, how therapy influences it and how one can get around it? Working together with his research group he has identified signaling pathways that influence normal and neoplastic breast stem cells, metastasis, and resistance to targeted therapies at the molecular, cellular, and whole organism levels. The Advanced ERC Grant, STEM-BCPC, focuses on signal transduction and epigenetic mechanisms of breast cell plasticity and cancer. This interdisciplinary project seeks to elucidate the integrated effects of signaling pathways and epigenetics on breast cell fate and tumor heterogeneity, and to leverage this mechanistic understanding into therapy. He is developing a personalized medicine program in collaboration with clinicians.

Each year, EMBO elects leading scientists as EMBO Members on the basis of proven excellence in research. With his election, Bentires-Alj figures – along with 13 other FMI scientists – among Europe’s top 1500 life scientists. EMBO Members provide scientific expertise to the fellowship and conference programs coordinated and funded by EMBO, as well as participate in projects to promote the public dissemination of scientific knowledge.

At this year’s meeting of the Basel Stem Cell Network, Shany Koren, a postdoctoral fellow in Mohamed Bentires-Alj’s group, received the Bruno Speck Award 2016. The award recognizes her contribution to a better understanding of tumor heterogeneity. Her study, published in Nature, shows how the most frequent mutation in human breast cancer, the PI3-kinase mutation, forces cells back into a dedifferentiated, stem-like state from which tumors containing cells of various lineages can develop. 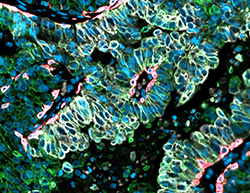