FMI research groups led by Patrick Matthias and Heinz Gut have elucidated the long-sought crystal structure of the catalytic domains of HDAC6, as well as functionally analyzing this protein. HDAC6 is a key player in the cellular stress response, and its inhibition is considered a promising avenue for the treatment of myelomas and possibly also autoimmune diseases and inflammation. This study should therefore facilitate drug development efforts. In addition, the scientists identified a novel HDAC6 selective inhibitor and clarified how HDAC6 acts on its main physiological substrate tubulin.

Histone deacetylases (HDACs) remove acetyl groups from histones – the proteins around which DNA is coiled to form chromatin – and thus play an important role in gene regulation. HDAC inhibitors have proved beneficial in various pathological conditions, and HDACs have been recognized as promising therapeutic targets, particularly in cancer. HDAC6 offers an additional advantage, as it primarily deacetylates cytoplasmic targets such as tubulin, thus affecting cellular migration, metastasis formation and angiogenesis. Unfortunately, HDAC6 has previously defied all efforts to reveal its crystal structure. It is the only deacetylase with tandem catalytic domains, and researchers have long been eager to understand the organization of these domains and their impact on activity.

Yasuyuki Miyake from Patrick Matthias’ group collaborated with Jeremy Keusch of the FMI protein structure facility to elucidate the crystal structure of the catalytic domains of zebrafish HDAC6, which then enabled them to model the human enzyme. Matthias comments: “It’s a common procedure in structural biology to elucidate the structure of a variant species which readily crystallizes and then model human orthologues based on these results. Interestingly, a group of medicinal chemists from the University of Pennsylvania and Harvard University has simultaneously obtained similar and complementary results. The HDAC6 zebrafish variant seems to offer advantages for structural studies.” Using this structural information, the FMI researchers functionally analyzed HDAC6 and identified unique features important for its physiological activity.

The scientists first addressed an as yet unresolved question: it has not been clear whether HDAC6 preferentially interacts with polymerized tubulin – microtubules, the large filamentous structures in a cell that confer stability, facilitate intercellular transport and underlie cellular motility – or whether it binds to free tubulin dimers. Miyake says: “We showed that HDAC6, while acting on both forms, has a several-fold preference for free tubulin dimers. This makes sense, and HDAC6 can be viewed as a resetting factor following microtubule catastrophe.”

According to Matthias, serendipity led to another unexpected finding: “For our structural studies, we worked with the prototypical HDAC inhibitor trichostatin A (TSA), which was discovered more than 25 years ago. By chance, our batch of TSA contained both enantiomers – as it were, the left-handed and the right-handed version.” The scientists thus obtained structures of HDAC6 with (R)-TSA and (S)-TSA and realized that the interaction differed. Joining forces with chemists at the University of Notre Dame in Indiana, Matthias and his group showed that, while (R)-TSA is a broad-range HDAC inhibitor, (S) TSA has 20 fold selectivity for HDAC6 – a phenomenon they also observed in vivo. Matthias concludes: “This observation came as a surprise and may open up new avenues for the generation of novel HDAC6-specific inhibitors, helping to accelerate drug development efforts.” 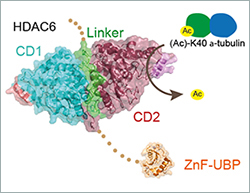 Crystal structure of the catalytic domains (CD1, CD2) and of the zinc finger (ZnF-UBP) domain of HDAC6. CD2 has the main catalytic activity. 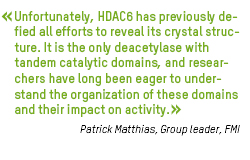 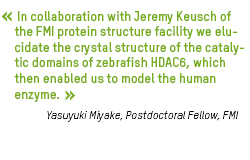 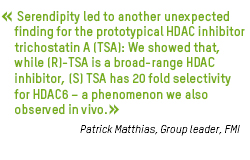