Giving the legs a hand: How our limb movements are coupled by long-projecting neurons

We humans walk with our feet. This is true, but not entirely. Walking, as part of locomotion, is a coordinated whole-body movement that involves both the arms and legs. The research group of Silvia Arber at the FMI and the Biozentrum of the University of Basel has identified different subpopulations of neurons in the spinal cord with long projections. Published in Neuron, the results show that these neurons coordinate movement of arms and legs and ensure a stable body posture during locomotion.

The locomotor pattern consists of a highly controlled sequence of muscle contractions, which are controlled by neuronal circuits in the spinal cord and the brain. The research group of Silvia Arber at the Biozentrum of the University of Basel and the Friedrich Miescher Institute for Biomedical Research (FMI) now reveal that specific, long projecting neurons, traversing our spinal cord, form an important basis for the coordination of fore- and hindlimbs. These neurons couple local networks over long distances and thereby ensure posture and rhythm of our body during locomotion.

Neuronal circuits in the spinal cord reflect walking pattern
Even though humans rose from the quadrupedal position to stand on their feet during evolution, coordination and alternation patterns of the four limbs are still needed to move efficiently as in all other quadrupedal species. “We showed in a mouse model that the diametric movement of fore- and hindlimbs is reflected in neuronal circuits of the spinal cord," says Ludwig Ruder, first author of the study. Thus, axons of most excitatory neurons cross the midline of the spinal cord and contact contralateral networks. In contrast, inhibitory neurons project predominantly on the same side of the body. The diagonal and mirrored pattern of the excitatory neuronal connections is very interesting when observing the coordination of arms and legs in a runner as Usain Bolt. “During running, not only do his legs move, but synchronously and diametrically also his arms – in complete coordination with each other," says Ruder.

Long projecting neurons control whole body parameters of locomotion...
To demonstrate the importance of long projection neurons in the spinal cord for the walking pattern, the researchers selectively eliminated those neurons. “Upon inactivation of spinal long projection neurons that couple local networks, not only is the stability and speed during running impaired, but also the coordinated fore- and hindlimb movements fall apart at higher speeds," says Ruder. Interestingly, local movement patterns within a single limb remain unaffected. This reinforces the specific role of long projecting neurons in the regulation of whole body movement.

... and distribute information of the brain
In a next step, the research team observed that the neurons with long projections broadcast their signals throughout the spinal cord and receive extensive input from various brain regions. This organization of long projection neurons and their connections places them at an important intersection between integrating information from the brain and distributing it in the spinal cord.

Up to now, researchers investigated mainly local spinal networks and their role in movement. In contrast, neurons with long projections have not been studied all that much. "However, the results of our new study show that long projecting neurons in the spinal cord exhibit a very important role for the coordination of the locomotor pattern," explains Silvia Arber. “Henceforth, we plan to investigate how the brain interacts differently with local and long projecting spinal neurons to control them specifically." In the long run, these results can be important to restore functionality after spinal cord injuries. 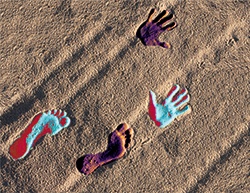 Walking is a whole-body movement. Arm and leg movements are coupled by a long neuronal network in the spinal cord. 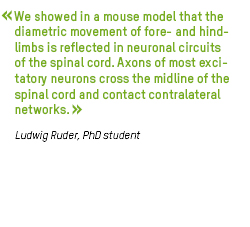