Earlier work from the laboratory of Susan Gasser had noted changes in the physical behavior of chromatin when it incurred DNA damage: loci bearing double-strand breaks showed enhanced movement, becoming highly dynamic. Furthermore, the same effect could be observed with undamaged sites in a cell nucleus responding to DNA damage. Getting to the root cause of this phenomenon, Michael Hauer, a PhD student in her group discovered that histones dissociate from DNA and roughly 30% of the entire complement are degraded upon DNA damage. The process is controlled by the so-called checkpoint response, and the reduction in nucleosome density not only increases DNA mobility but also leads to increased chromatin accessibility for recombination-mediated repair.

DNA repair is paramount for the functioning of every cell and organism. Without it, proteins no longer work properly and genes are misregulated, all of which can lead to disease. It comes therefore as no surprise that the cell devotes enormous resources to detect and repair DNA damage and ensure DNA integrity.

Susan Gasser, Director of the Friedrich Miescher Institute for Biomedical Research, and her research group, have now identified a novel important process that safeguards DNA integrity. In a publication in Nature Structural and Molecular Biology, the scientists show that histone degradation upon DNA damage facilitates the repair processes.

Histones built up the spools around which DNA is wound and organized into chromatin, sometimes tighter, sometimes less tight. They define how accessible DNA is for the many proteins that interact with DNA, also the repair machinery. The scientist could now show in a sophisticated and elaborate study in yeast, that the cellular levels of histones drop by 20-40% in response to DNA damage. These histones are lost from DNA and are concomitantly degraded. As a consequence, chromatin is less compacted and becomes more flexible. They show that this in turn enhances repair by recombination mediated mechanisms.

“We think this newly elucidated process is an integral part of the DNA damage response,” comments Susan Gasser. “The increased flexibility and mobility of the DNA allows the homology searches and accessibility for molecular interactions that are necessary for proper DNA repair.”

Michael Hauer adds: “We would now like to further see if this phenomenon of damage-induced histone degradation in yeast also holds true for higher organisms - will methods that can lower nucleosome occupancy in mammalian cells for example lead to increased rates of homologous recombination?” 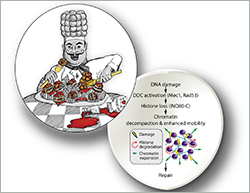 Meatball-eating chef illustrates the principle of proteasome, checkpoint and INO80 dependent histone loss in response to DNA damage. Artwork by Laura Godi (Laura@LauraGodi.com) (left). A model further depicts the individual steps in this process (right). Click on image to enlarge. 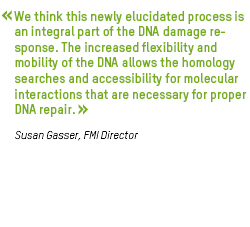 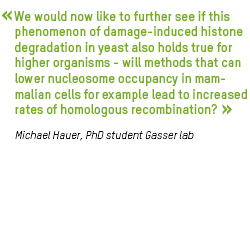