Silvia Arber, Senior group leader at the FMI and Professor of Neurobiology at the Biozentrum of the University of Basel, is awarded today the 2017 Louis-Jeantet Prize for Medicine. As one of the best-endowed awards in Europe, the Louis-Jeantet Prize for Medicine fosters scientific excellence and supports fundamental biological research expected to be of significance for medicine. She receives the award for her contributions to our understanding of how movement is controlled in mammals.

The neurobiologist Silvia Arber is one of the most eminent biologists in Switzerland. She joined the FMI in 2000 when she was also appointed to the University of Basel. After studying biology at the Biozentrum, Arber carried out her PhD thesis in the laboratory of Professor Pico Caroni at the FMI. With a long-term fellowship awarded by the Human Frontier Science Program, Arber subsequently joined Thomas Jessell’s laboratory at Columbia University in New York to investigate mechanisms of neuronal maturation in the spinal cord. From the outset of her research career, she has sought to answer fundamental questions about how neuronal circuits are established and function.

In the years since then, Arber and her group have investigated how neuronal circuits control and orchestrate movement, thus contributing to a better understanding of how motor commands for specific actions are generated. As diseases of the nervous system frequently lead to movement disorders, and spinal cord injury causes immobility, the work of Silvia Arber will be essential for future interventions. For these groundbreaking studies, Arber received the 2017 Louis-Jeantet Prize for Medicine.

She will use the prize money to conduct further research on how neuronal circuits regulate the diversification of motor behavioral programs.

At the same time, the Foundation Louis-Jeantet also honors the immunologist Caetano Reis e Sousa, senior group leader at the Francis Crick Institute in the UK.

The award ceremony will take place in Geneva on Wednesday, 26 April 2017. 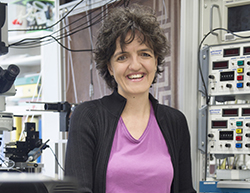