Each face is unique, even though the genes controlling facial shape are almost identical in every individual. Filippo Rijli and his team at the Friedrich Miescher Institute for Biomedical Research (FMI) have discovered an epigenetic mechanism that regulates face morphogenesis. During early development, the neural crest cells that give rise to the various facial structures maintain chromatin plasticity, with all the genes involved remaining poised to respond to local cues. Once the cells are exposed to these environmental signals, a switch from a poised to an active chromatin state occurs, inducing position specific transcriptional programs that give rise to the chin, cheekbones or forehead.

A pronounced forehead, a button nose, high cheekbones or almond-shaped eyes – each face is unique, despite the fact that the genes controlling the shape of craniofacial structures are almost identical in every individual. So how do these distinctive features arise from the same subset of genes?

The generation of distinctly shaped craniofacial structures assembled into a harmonious face depends on a specialized cell type – neural crest cells, which give rise to most of the skull and face cartilage and bones. During early embryonic development, the neural crest cells migrate from the developing neural tube to the prospective head region. Premigratory neural crest cells are naive multipotent cells, which become committed to a cartilaginous fate once they reach their final destination.

Neural crest cells also acquire specific “positional” identities (related to their position in the developing face), which define the shapes of the bones and cartilage that will form the mandible and chin, cheekbones, nose or forehead. This positional identity is acquired during the cells’ migration, depending on the path taken and their interactions with the local environment. However, even after migration, positional identity is not irreversibly fixed, and neural crest cells maintain a degree of plasticity.

To date, it has not been clear how neural crest cells can maintain plasticity through migration, while being poised to respond to local cues and induce position-specific transcriptional programs.

Filippo Rijli and his group at the FMI, together with FMI computational biologist Michael Stadler, have now elucidated how this process is enabled by epigenetic regulation of chromatin organization.

In a study published in Science, they describe a specific chromatin organization whereby neural crest cells remain transcriptionally poised until the end of their migration, thus maintaining the potential to give rise to all the different facial elements, irrespective of their final position.

First author Maryline Minoux, a visiting scientist in the Rijli lab and professor at the Strasbourg University Faculty of Dental Medicine, explains: “We compared the chromatin profile of subpopulations of neural crest cells in different positions before and after migration. In the postmigratory neural crest cells, the promoters of the differentially silenced genes – i.e. genes not expressed in some populations, but expressed in others – were maintained in a bivalent configuration marked by both repressive H3K27me3 and activating H3K4me2 epigenetic histone modifications. These genes were thus poised for activation. Surprisingly, this poised configuration was already present in the premigratory neural crest cells.” Once the cells receive specific environmental signals, they lose the repressive H3K27me3 mark and start the position-specific transcriptional program.

In addition, the authors found that the poised chromatin state is regulated by the Ezh2 component of the Polycomb Repressive Complex 2, a known chromatin remodeler during embryonic development. Ezh2 specifically adds methyl groups to lysine 27 of histone H3.

About Filippo Rijli
Filippo Rijli is a Senior Group leader at the FMI and Adjunct Professor of Neurobiology at the University of Basel. He is interested in the epigenetic and transcriptional mechanisms of craniofacial development and topographic map formation in the brain.
» More about Filippo Rijli 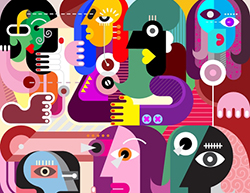 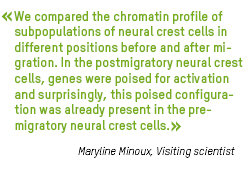 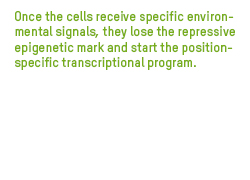 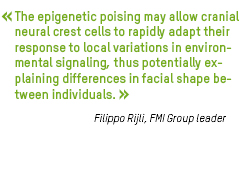