A novel approach developed at the Friedrich Miescher Institute for Biomedical Research (FMI) has allowed scientists in Dirk Schübeler's group to dissect and quantify the individual steps of transcription initiation. Unexpectedly, they observed that RNA polymerases frequently dissociate from the DNA template, rather than pause, before transcription continues. They thus gained new mechanistic insights into gene regulation.

When the French physiologist Étienne-Jules Marey set out to study animal locomotion at the end of the nineteenth century, he needed a novel technology to overcome the limitations of the human eye in visualizing rapid movements. To freeze animal motion, he recorded several phases of movement in a single frame, pioneering what he later termed chronophotography. The resulting pictures of a flying bird, for example, were not only aesthetic, but most importantly helped him to dissect the physiology of motion. Nowadays, molecular biologists face a similar problem when trying to understand gene regulation. Until now, when they looked at the binding of proteins to the genome, they saw thousands of binding events overlaid in a blurry picture.

Now, Dirk Schübeler and his group at the FMI have developed a high-resolution method whereby different phases of gene expression can be detected. First author and SNSF Ambizione Fellow Arnaud Krebs explains: "For the first time, we're able to look at the binding of proteins regulating transcription on individual DNA molecules. Based on this, we can study the steps of the transcriptional process one by one, similar to how Marey separated the different phases of movement in one picture."

But how does this help to understand how genes are activated or repressed? To transcribe a particular gene, transcription factors recognize and bind to certain DNA sequences, and recruit RNA polymerase II, which in turn initiates RNA synthesis. Before producing the full transcript, the polymerase pauses briefly to control the quality of the transcript. Interestingly, for some genes this pause is extended and RNA synthesis is thus blocked. It had been thought that this pause could be a means of loading a pool of polymerases to enable fast activation of genes that require rapid induction, such as those involved in the response to stress.

However, using their new method to directly probe RNA polymerases on DNA, the FMI team realized that - rather than being stably paused - the polymerases frequently terminate transcription prematurely. According to Krebs, they observed that a large fraction of the RNA polymerases dissociates from the DNA. As Schübeler explains, these findings refine the prevalent concept of pausing: "What we see rather suggests a mechanism involving high RNA polymerase II turnover at these genes. While this is mechanistically different from the prevalent concept, the , the new model similarly allows for rapid activation of genes upon stimuli."

The FMI scientists were thus not only able to quantify protein binding at single-molecule resolution, but also gained a better understanding of transcription initiation - and new mechanistic insights into gene regulation.

About Dirk Schübeler
Dirk Schübeler is a Group Leader at the FMI. He is interested in the nature of chromatin structure and its correlation with gene activation and silencing. His research aims at understanding how nuclear events influence the expression phenotype in higher eukaryotes, and how they are propagated during cell differentiation.
» More about Dirk Schübeler 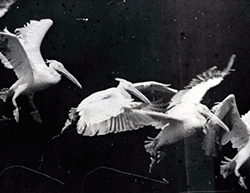 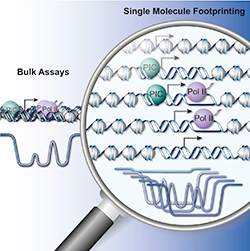