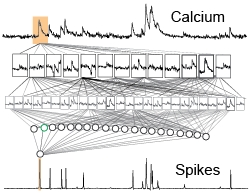 Peter Rupprecht and Stephan Gerhard, two members of Rainer Friedrich's group at the FMI, have developed a powerful and elegant machine-learning approach to reconstruct action potentials from calcium signals in neurons. Their method won them the "Spikefinder challenge" - a friendly competition which attracted more than 30 teams of scientists - including deep-learning experts - from around the world.

Optical methods such as multiphoton microscopy are widely used to measure neuronal activity, but their readout is indirect: rather than directly detecting action potentials, they measure changes in the fluorescence of a calcium indicator, typically in neuronal somata. The fluorescence signals depend on calcium influx through voltage-gated calcium channels, which in turn are activated by action potentials. However, the precise relationship between calcium signals and action potentials remains ill-defined.

Peter Rupprecht, a PhD student in Rainer Friedrich's group, thought that machine-learning approaches using multilayer convolutional neural networks - known as deep learning - should be ideal for tackling this problem. He developed an approach of this kind together with Stephan Gerhard, a postdoctoral fellow in Friedrich's lab who uses deep learning for image analysis. Rainer Friedrich explains: "Rather than using brute force, Peter and Stephan designed a relatively small network, preconfigured it using neurobiological know-how, and preprocessed the input data in a smart way." This original approach turned out to be very powerful: not only is it far superior to the approach previously used by Friedrich's lab, but it also won joint first prize in the Spikefinder challenge.

Key success factors were a good general understanding of deep-learning methods, a thorough knowledge of multivariate data analysis, and - most important, according to Friedrich - some very clever ideas. Rupprecht and Gerhard, along with the authors of the other top-performing algorithms in the challenge, have been invited to describe their method in a paper.