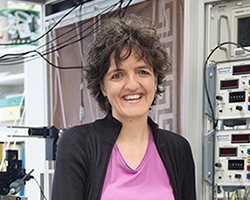 Silvia Arber, Biozentrum of the University of Basel and Friedrich Miescher Institute for Biomedical Research in Basel, will receive the 2018 Pradel Research Award. The award is presented annually by the National Academy of Sciences of the United States to recognize neuroscientists whose work is making major contributions to our understanding of the nervous system.

The neurobiologist Silvia Arber receives the award for her "research on the assembly, structure and function of motor circuits, which resulted in fundamental contributions to our understanding of the organizational principles of the motor system including the spinal cord and the brainstem".

In their communication about the Pradel Research Award the National Academy of Sciences (NAS) stresses: "Arber’s work no only reveals the functional organization of circuits at the core of motor control but has the potential to improve recovery in people and animals that have lost or attenuated motor function."

Silvia Arber, according to the NAS "one of the world’s most prominent neurobiologist", is both Senior group leader at the Friedrich Miescher Institute for Biomedical Research (FMI) and Professor of Neurobiology at the Biozentrum of the University of Basel. After studying biology at the Biozentrum, Arber carried out her PhD thesis in the laboratory of Professor Pico Caroni at the FMI. With a long-term fellowship awarded by the Human Frontier Science Program, Arber subsequently joined Professor Thomas Jessell’s laboratory at Columbia University in New York. In 2000, she was appointed to the University of Basel, where she leads a research team at the Biozentrum and the FMI, working on neuronal circuits controlling motor behavior. During her career, she has received numerous major awards, including recently the Otto Naegli Prize (2014), the Louis-Jeantet Prize for Medicine (2017) and the Novartis VIVA Leading Scientists Award (2017). In 2010 as well as in 2016, she secured one of the much sought-after European Research Council (ERC) Advanced Investigator Grants.

The Pradel Research Award
Each year the National Academy of Sciences of the United States presents the Pradel Research Award to recognize mid-career neuroscientists whose work is making major contributions to our understanding of the nervous system. The recipient is presented with a $50,000 research award to designate to an institution of their choice to support neuroscience research.

» More about the Pradel Research Award