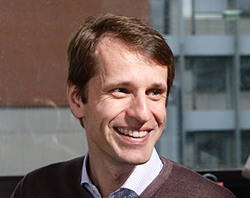 Botond Roska, who has a research group at the FMI and is co-director of the Institute of Ophthalmology Basel (IOB), is awarded the 2019 Louis-Jeantet Prize for Medicine, as announced yesterday. As one of the best-endowed awards in Europe, the Prize fosters scientific excellence and supports fundamental biological research that is of considerable significance for medicine. Roska is recognized for the discovery of basic principles of visual information processing and the development of therapeutic strategies, such as gene therapy, to restore vision in retinal disorders.

Born in Hungary, Roska obtained a PhD in neurobiology from the University of California, Berkeley and studied genetics and virology as a Harvard Society Fellow at Harvard University and the Harvard Medical School. In 2005, he joined the FMI to lead a research group. In 2018, he became a founding director of the IOB, which is devoted to translational ophthalmology. Part of his research is still pursued at the FMI.

Vision and vision restoration
Dysfunction of the visual system, leading to visual handicap or blindness, is critical in humans. Blindness has a drastic effect on day-to-day life but, unfortunately, sight-restoring therapy for the visually impaired and blind is still a major unmet medical need. To find ways to repair visual dysfunction, Botond Roska and his co-workers investigate the retina, thalamus and cortex at the level of cell types and circuits. The knowledge they are acquiring has already improved our understanding of disease mechanisms and opened up paths to potential treatments. Roska’s research group has illustrated how cell types in the visual system interact in local and long-range circuits and extract features from the visual scene. Combining this knowledge with human genetics and molecular techniques, they have provided insights into the mechanisms of cell type-specific genetic diseases. Bringing their knowledge of visual circuits together with technologies such as optogenetics, they have designed novel therapies for restoring vision in genetic forms of blindness. The essence of these optogenetic therapies is to deliver genetically encoded light sensors to strategically important retinal cell types in the blind retina. Once there, non-photoreceptor cells are converted into photosensors or the photosensitivity of native photoreceptors compromised by disease is restored. These artificial photoreceptors then drive vision. Botond Roska’s work illustrates how insights into the organization of the cell types and circuits of the nervous system, when combined with cellular engineering, could be used to design new therapies to fight blindness.

The Louis-Jeantet foundation grants the sum of CHF 500,000 for the prize, of which CHF 450,000 is for the continuation of the prize-winner's research and CHF 50,000 is for their personal use. Roska will use the prize money to develop methods to further understand the functional architecture of the human retina in both normal and disease states.

The Jeantet Foundation also honors Luigi Naldini, with the 2019 Jeantet-Collen Prize for Translational Medicine for his pioneering work taking gene therapy from the bench to the bedside, allowing to treat several genetic diseases.
The award ceremony will be held in Geneva on April 10, 2019.

» More about the Louis-Jeantet Prizes and Foundation