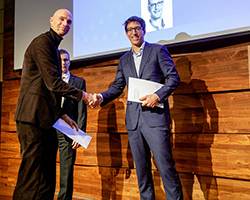 Alex Attinger at the awards ceremony

Below:
Alex Attinger & Bo Wang (Bo could not attend the ceremony)

The two ex-PhD students from the group of Georg Keller are recognized in the category "Neurosciences and Diseases of the Nervous System" for a study in which they shed light on neural circuits in the cortex that underlie the integration of movement and visual feedback. The Pfizer Research Prize is one of the most prestigious awards in the field of basic medical research and clinical research in Switzerland.

Movement and sensory feedback are tightly coupled, e.g. as we turn our head one way, the visual world moves the other way. This coupling of movement and sensory input is crucial for the normal development of visual perception. To experimentally test how information about what mice see is combined with information about how mice move, Attinger and Wang raised mice in virtual environments and recorded the activity of the neurons in their brain while the animals were playing a simple video game. They found that in the brain of mice, visual information coming from the eyes is continuously compared to an expectation of the visual input. Through learning by experience, a specialized circuit in the visual cortex learns to detect mismatches between actual sensory input and the expected input.

These findings help to understand how the brain combines different types of information to shape our perception. This opens up new ways to explore diseases in which this perception is disturbed. This is why the Pfizer Research Prize Foundation awarded the two FMI researchers in the category "Neurosciences and Diseases of the Nervous System".

The Pfizer Research Prize has been awarded annually since 1992 by the Pfizer Foundation and is one of the most important awards in the field of basic medical research and clinical research in Switzerland. It is awarded to young scientists who have made outstanding and forward-looking contributions to basic or clinical research at Swiss research institutes or hospitals. This year 24 young awardees were selected, in five different categories. The official awards ceremony took place last Thursday in Zürich.

“Of course it’s a great honor to be recognized for our work,” says Attinger. “The awards ceremony was great! Since there were 24 awardees in total and their research was briefly presented, it was also an exciting opportunity to learn more about biomedical research in Switzerland.”

Alex Attinger at the awards ceremony

Below:
Alex Attinger & Bo Wang (Bo could not attend the ceremony) 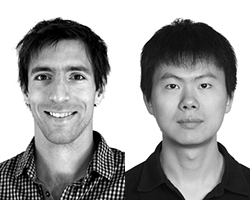