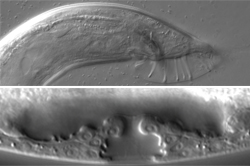 A key player in the maturation of sexual organs

Puberty is a period of extensive changes of body morphology and function. As much as we are familiar with these life-altering changes, relatively little is known about what sets the whole process in motion. Thanks to studies in the tiny worm C. elegans, the group of Helge Grosshans is getting closer to understanding how the onset of puberty is genetically controlled. Recently they uncovered a mechanism that initiates sexual organ maturation.

The let-7 gene is considered a fundamental regulator of developmental timing in animals – in organisms as distinct as worms and mammals. It produces a small RNA, known as the let-7 microRNA (miRNA), that can silence other genes. In the model organism C. elegans, let-7 controls the transition from a juvenile to an adult animal. This transition, like human puberty, involves the formation of mature sexual organs, in this case the vulval-uterine tract for the hermaphrodite and the tail in the male. (There are no female C. elegans worms – only hermaphrodites that can either self-fertilize or mate with the less abundant males.) The vital importance of let-7 is highlighted by the fact that worms with a dysfunctional let-7 die a dramatic death: they rupture through the vulva! (see video *) .

In a study published in Life Science Alliance today, the group of Helge Grosshans now presents new findings about how let-7 controls worm puberty. Using precision genome engineering, the researchers specifically interfered with regulation of one or all targets of let-7. They found that the only relevant target of let-7 for the formation of sexual organs is an mRNA called lin-41. This mRNA encodes an RNA binding protein that silences four other mRNAs. So basically, let-7 inhibits lin-41, which therefore cannot inhibit the expression of the four genes anymore; those get expressed and promote the transition of the worm to adulthood. (See graph at the bottom of this page)

“Although extensive studies of the C. elegans developmental timing pathway have helped to identify many of its players, we still don’t understand well how these players function together. With this study, we are beginning to fill the gaps and to elucidate the molecular mechanisms underlying the transition from juvenile to adult – an important transition in the life of worms, and humans,” says Grosshans. “Intriguingly, timing defects in human puberty have been linked to genetic variations that alter let-7 activity. It will therefore be interesting to study whether mammalian LIN41 also controls mammalian sexual organ maturation and possibly other puberty-related events.”

Grosshans also notes that the study provides unexpected insight into another field, that of miRNA function. “miRNAs are often thought to act through a network activity where they silence many targets modestly but coordinately. However, our work clearly demonstrates that the let-7 miRNA functions through only one target, lin-41. Although experiments comparable to what we have done here for let-7 are lacking for other miRNAs, there are other instances that seem to fit better to a model of only one or a few key miRNA targets. Hence one might question whether the network activity model really describes the predominant mode of miRNA function in animals.”