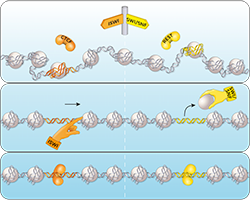 The transcription factors CTCF and REST require two different types of remodelers in order to bind to the DNA: CTCF needs ISWI, which can slide nucleosomes along the DNA; REST needs SWI/SNF, which can evict nucleosomes. CLICK TO ENLARGE

Chromatin remodelers have the ability to move nucleosomes, which represent a physical barrier for access to DNA. Work by the group of Dirk Schübeler helps to better understand how remodelers orchestrate the global organization of nucleosomes in mammals. In a study published in Nature, the researchers uncovered how two classes of remodelers selectively mediate the binding of distinct transcription factors.

A single human cell contains about two meters of DNA. How is all that DNA organized into chromosomes and squeezed into a tiny nucleus? The DNA actually winds around proteins called histones – forming nucleosomes, the basic repeating unit of chromatin. This is essential for packing DNA but creates a problem: nucleosomes reduce the ability of proteins such as polymerases and transcription factors, which are required for gene transcription, to access their binding sites on the DNA. It is therefore vital for the proper functioning of all eukaryotic cells to have a mechanism of opening up chromatin transiently. This task is performed by proteins called chromatin remodelers, which evict, slide, insert or replace nucleosomes, thereby exposing underlying DNA sequences. While this class of proteins is very frequently mutated in cancer, it remains largely unclear how the four mammalian remodeler families orchestrate the global organization of nucleosomes.

The group of Dirk Schübeler found out more about these cellular construction workers in a study published in Nature today. In order to investigate the function of two families of remodelers – ISWI and SWI/SNF – the researchers inactivated them in embryonic stem cells and systematically analyzed transcription factor binding. Surprisingly they found two non-overlapping groups of transcription factors, defined by which remodeler they specifically require for binding. They also learnt more about the biological function of the remodelers; in particular, they provided in vivo evidence that ISWI directly regulates the distance between nucleosomes and their overall organization in the genome.

The team investigated some particularly important transcription factors, including CTCF, which is essential for long-range chromosome looping and chromatin conformation. “CTCF is dependent on ISWI, but not SWI/SNF, for its binding; in absence of ISWI, CTCF cannot bind and this has drastic effects on the three-dimensional organization of the genome,” says Mario Iurlaro, one of the first co-authors of the study. “This is just one example of the impact that chromatin remodelers – and their potential loss – can have on the genome overall.” As a next step, the team wants to better understand the mechanisms regulating the relationship between different transcription factors and remodelers.

» More about the Schübeler group

The transcription factors CTCF and REST require two different types of remodelers in order to bind to the DNA: CTCF needs ISWI, which can slide nucleosomes along the DNA; REST needs SWI/SNF, which can evict nucleosomes. CLICK TO ENLARGE