A role for gene activators in 3D nuclear organization

From yeast to man, the genome is partitioned into subnuclear compartments, with active euchromatin spatially separated from silent heterochromatin, which is often found at the nuclear periphery. This spatial distribution correlates with gene expression and contributes to cell-type integrity. In a study published in Nature, the Gasser group showed that the sequestration of a strong gene activator, CBP/p300, regulates the spatial organization of inactive domains.

In addition to the local structure of chromatin is a level of gene control based on the spatial separation of active from inactive chromatin domains within the nucleus. The 3D organization of euchromatic (active) and heterochromatic (inactive) genes helps stabilize cell fate choices. This characteristic organization of the genome is robust, yet it is also flexible: some genomic sequences shift from euchromatic to heterochromatic compartments, and vice versa, during development or in response to the environment. The principles that govern chromatin segregation appear to be universal, and are based on post-translational modifications of proteins that organize DNA.

Using C. elegans as a model organism, the Gasser group previously showed that a specific modification on one of the core histones - the methylation of Lysine 9 on histone H3 (H3K9me) - is the key epigenetic mark driving the sequestration of inactive chromatin at the nuclear periphery, away from euchromatin. The sequestration is mediated by a protein that directly recognizes H3K9me, CEC-4. This pathway is the dominant pathway for chromatin organization in embryonic cells, yet another pathway comes into play as cells differentiate. A microscopy-based screen that monitored nuclear organization in differentiated intestine cells identified MRG-1 - a protein that recognizes a euchromatic mark - as a regulator of heterochromatin sequestration.

This role for MRG-1 was unexpected, as it is known to bind a histone modification that is found on active genes. How can loss of a euchromatic factor compromise heterochromatin positioning? In a study published in Nature, Daphne Cabianca - a postdoc in the Gasser group - discovered that the loss of MRG-1 allows another histone modifier, the acetyltransferase CBP/p300, to gain access to repressed heterochromatin domains. The activity of CBP/p300 in turn disrupts heterochromatin, leading to both its spatial relocation and its transcriptional activation. Cabianca showed that CBP/p300 heterochromatin delocalization requires the bZIP transcription factor ATF-8. Accordingly, bZIP binding motifs are found within promoters of genes that are delocalized and activated upon mrg-1 ablation throughout the genome.

The important new concept revealed in this study is that the spatial organization of chromatin is regulated by both direct perinuclear attachment of silent chromatin and an active retention of activating factors within euchromatin. Intriguingly, similar bZIP binding motifs are found within heterochromatic satellite DNA in mammals, suggesting that a mechanism whereby euchromatic markers protect heterochromatic domains, is conserved.

Model of MRG-1 mode of function for chromatin positioning. H3K36me and MRG-1 mark open euchromatin and promote the retention of CBP/p300 in active domains. Upon ablation of MRG-1 (right graph), CBP gains access to heterochromatin through bZIP transcription factors, favouring the detachment of heterochromatin from the inner nuclear membrane by counteracting an anchoring pathway that is induced as cells differentiate. Recruitment of CBP/p300 to heterochromatin correlates with increased H3K27ac. 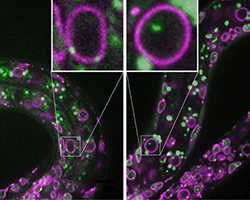 Live microscopy of a C. elegans L1 larva with the nuclear envelope labelled in purple and a heterochromatic domain tagged in green.