The Friedrich Miescher Institute for Biomedical Research is a leader in the field of DNA and RNA research. DNA has become the icon of modern bioscience but few people realize that it was our namegiver, who – almost a century before Watson and Crick – laid the chemical groundwork for the molecular breakthroughs that followed. Today, 150 years after Miescher’s first ‘discovery’ of DNA, we want to highlight his remarkable work.

Born in Basel in 1844, Friedrich Miescher grew up in a well-respected family that was part of the academic elite. His father was a physician and taught anatomy at the University of Basel; his uncle was an embryologist. After Miescher graduated from medical school in 1868, he decided to pursue a career in research. At the University of Tübingen in Germany, he studied under renowned chemist and physiologist Felix Hoppe-Seyler, a pioneer of biochemistry who had discovered hemoglobin just a few years before.

The consensus at that time was that cells were largely made of proteins, therefore Miescher was particularly interested in these molecules. Choosing leucocytes as his source material – obtained from the pus on surgical bandages from a clinic nearby – he set out to isolate the different types of proteins that make up these cells. During his tests, he noticed something unexpected: a substance precipitated from the solution when he added acid, and dissolved again when he added alkali – unexpected properties that did not match those of proteins. Realizing the potential significance, Miescher developed new protocols that allowed him to cleanly separate and analyze this mysterious precipitate.

A new class of cellular substance

In February 1869, Miescher wrote in a letter to his uncle: “In my experiments with low alkaline liquids, precipitates formed in the solutions after neutralization that could not be dissolved in water, acetic acid, highly diluted hydrochloric acid or in a salt solution, and therefore do not belong to any known type of protein.”

The precipitate was DNA, or “nuclein”, as Miescher named it due to its occurrence in the cell’s nuclei. The term is still preserved in today's name Deoxyribonucleic acid.

In subsequent analyses, Miescher determined that nuclein was made up of phosphorus, in addition to the more usual components of organic molecules – carbon, nitrogen and hydrogen. He later also isolated nuclein from other sources, including salmon sperm. In the years to come, Miescher became increasingly absorbed in researching other topics, including the metabolic changes that occur in salmon when they spawn. Yet nuclein remained a focus of his work throughout his career. In 1872, he was appointed as professor of physiology at the University of Basel, a position that had been previously held by his father. Friedrich Miescher died in 1895 from tuberculosis, aged 51.

An underestimated scientist and discovery

Despite the talents of Friedrich Miescher in conducting groundbreaking research, he lacked the drive to promote and publish the results of his work. He was a perfectionist who spent long hours in the lab, where he repeated his experiments and analyses many times and often still hesitated before communicating them. During his entire career, Miescher published only nine scientific papers. Many of his ideas were captured only through letters he wrote to friends and colleagues.

According to Miescher-expert Ralf Dahm, “Miescher’s scientific foresight was remarkable.” Nevertheless, the Basler scientist could not have imagined that the substance he isolated was the molecule of heredity itself. He published his work in 1871, two years after the experiments, and unassumingly entitled the publication: “On the chemical composition of the pus cells.” It took scientists 75 years to become truly aware of the significance of the described substance.

Today and despite impressive advances in recent years, our understanding of DNA and the regulation of our genome is still incomplete. We are at the beginning of exploring the possibilities in areas like epigenetics and personalized medicine. Scientists working at the FMI are at the forefront of these efforts, pushing the boundaries of our understanding of Miescher’s ‘nuclein’ ever further. 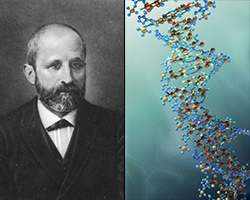