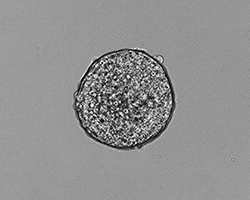 Unlocking the secrets of an important regulator of human development

The protein TRIM71 is an important regulator of animal development and plays a role in various diseases. In close collaboration, scientists from the groups of Helge Grosshans and Marc Bühler at the FMI elucidated the mechanism by which TRIM71 binds and turns off its RNA targets. They also identified several core targets of TRIM71, including proteins involved in genetic disorders.

TRIM71 controls stem cell fate by promoting self-renewal while preventing differentiation. Unsurprisingly, the protein is involved in various diseases: Inappropriately high levels have been linked to cancer, whereas specific mutations in TRIM71 contribute to a developmental human brain defect known as congenital hydrocephalus. How TRIM71 controls normal development and contributes to disease has been poorly understood. However, hints came from research on the model organism C. elegans, a small worm where TRIM71 is called LIN-41: Researchers from the FMI previously found that this protein acted as an RNA-binding protein.

Working under the umbrella of a national research network, the NCCR “RNA & Disease” (see side box), researchers from the Grosshans and the Bühler groups now set out to understand whether binding RNA is also a key function of the mammalian protein. They used mouse embryonic stem cells to demonstrate that TRIM71, as in C. elegans, binds specific structures on target RNAs, leading to impaired expression – an action called RNA-silencing. “It was amazing to see that the way TRIM71/LIN41 recognizes its targets in mammals is exactly the same as in worms,” says Alex Tuck, a postdoc in the Bühler group and one of the first authors of the study. “This nicely demonstrates the power of C. elegans as a model organism for studying core questions in biology.”

Indeed, when testing TRIM71 proteins that contained mutations found in patients with congenital hydrocephalus, the FMI researchers discovered that TRIM71-mutants could not properly bind and silence RNA targets. While it remains unknown which specific TRIM71 target(s) mediate this disease phenotype, the team’s success in identifying targets shared across several mouse and human cell lines provides a strong basis for further analysis.

As a proof of concept, Welte, Tuck and colleagues focused on the analysis of MBNL1 (muscleblind-like protein 1). This TRIM71 target is involved in the genetic disorder myotonic dystrophy and is known for promoting cell differentiation through alternative splicing – a process that allows a gene to produce more than one protein. The FMI researchers showed that the regulation of MBNL1 enables TRIM71 to take control of alternative splicing in stem cells, one possible mechanism to promote stem cell fates.

Thomas Welte, a postdoc in the Großhans group and the other first author of the study, summarizes the importance of the work: “We managed to uncover how a protein, which is essential for development, functionally works in mouse and human cells. These insights are an important step towards understanding how mutations of TRIM71 can cause disease.” Welte also highlights the benefits of collaboration: “The collaboration with Alex and the colleagues from the FMI Computational Biology Group was fun and key for the success of this project. Understanding how TRIM71 recognizes target mRNAs gives us the power to identify targets and precisely modify their regulation – a valuable tool for future research.”

- TRIM71/LIN41 bind their targets in exactly the same way in worms as in mammals
- MBLN-1, which promotes alternative splicing, is an example of an RNA target of TRIM71
- When TRIM71 doesn’t bind targets properly, this could lead to congenital hydrocephalus

About the NCCR RNA & Disease
This research has been funded by the National Center of Competence in Research, (NCCR) RNA & Disease, a network that connects researchers involved in RNA in Switzerland. A key goal of this NCCR is to build bridges between basic and medical research in order to promote rapid transition of new findings into medical applications. Several FMI groups are members of this network.
The last decades of research in molecular biology provided evidence that RNA (ribonucleic acid) is not a simple messenger between DNA (deoxyribonucleic acid) and proteins, but plays a central role in cellular processes. In recent years, a tremendous number of non-coding (nc)RNAs and complex RNA-mediated pathways involved in gene regulation have been discovered. These findings underline the pivotal contribution of RNA to the overall regulation of eukaryotic gene expression. It is therefore not surprising, that many diseases emerge from aberrant RNA processing or RNA-dependent dysregulation of gene expression. Learn more